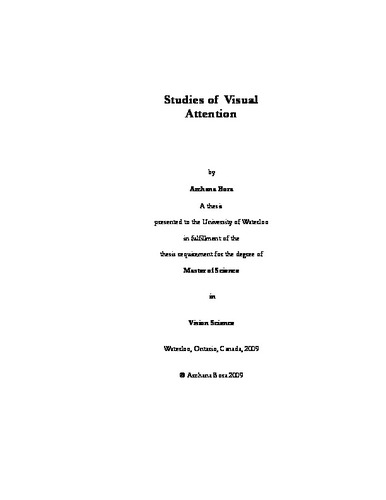 Aim The experiment proposed to study the effect of sustained visual attention in an effective visual field of 40 degrees, in cued and uncued conditions with different set-sizes. Methods The participants had a normal contrast and visual acuity with normal ocular/general health. The experiments were performed both for central (0 - 20degrees) and peripheral (>20 – 50 degrees) visual fields. The targets were presented with valid and invalid cued conditions in different set-sizes of 500, 1000 and 2000. The targets were Gabor gratings oriented at 90 or 180deg subtending a minimum angle of resolution (MAR) ranging from 1.5-10minarc at 25cm. The spatial frequency of the Gabor ranged from 1- 29cycles/degrees and contrast from 20-100%. The observer had to identify the Gabor with horizontal grating and register the response. The accuracy and the reaction times for the targets were evaluated. Results The central targets had lower reaction times and high accuracy compared to the peripheral targets. There was a significantly increasing eccentricity effect as the targets were displayed much peripherally. It was less with presentation of valid sustained cues but it was not eliminated. The diminishing contrast of the target had a significant increase in reaction times and reduced accuracy. The effect of increasing number of items in the display didn’t show any significant increase in reaction time, i.e. there was no “set-size effect” seen both central and peripheral targets. The valid cues improved the performance with lower reaction times, compared to the neutral cued conditions, in each of the different experiments and resulted in an improved accuracy in both the central and peripheral visual field. Conclusion Visual attention is affected by contrast, target size and spatial gratings. Reaction time is high and accuracy less for low contrast targets, high spatial frequency and larger set-size, except for set-size 2000 in the central field where it was seen that the reaction times were reduced. The effect is consistent in both central and peripheral visual fields. The set-size also has an effect on the reaction times and on accuracy. The effects are more pronounced in the peripheral visual field.