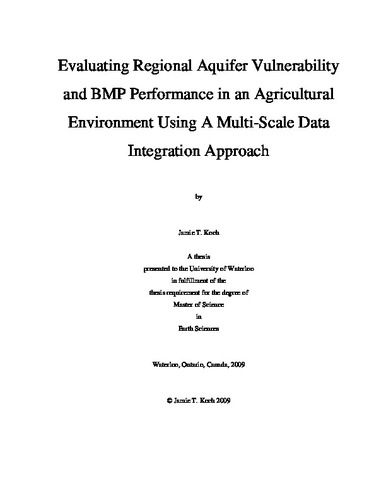 The increased use of both organic and synthetic fertilizers on agricultural land has lead to rising groundwater nitrate concentrations in some areas of southern Ontario. This has occurred at the Thornton Well Field in Oxford County, likely as a result of impacts from legacy agricultural activities in the area. In an attempt to mitigate the impact on water quality within the well field, the County purchased some of the agricultural land in the vicinity of the well field in 2001 with plans to reduce nutrient loading through the implementation of Beneficial Management Practices (BMPs). Since the initiation of the BMPs, the nitrogen application rates within the study site were reduced by 20 to 100% relative to historical rates. The objectives of this study were to provide a unique, five year data set which can assist in BMP development and provide direction for regional scale agricultural policy; evaluate the nitrate mass flux at numerous locations through the unsaturated zone beneath a BMP-activated agricultural field within a complex moraine environment; develop and compare various methods to upscale point measurements of mass flux to mass loading (t N03-N/yr) at the field and regional scale; evaluate standardized methods of assessing aquifer vulnerability and compare results within the context of non-point source agricultural contaminants at the field and regional scale; and determine whether monitoring water levels and temperature within monitoring wells is able to aid in evaluating vulnerability to surface contaminants. Information collected over two years was combined with data gathered by former researchers at the field site to create a unique and extensive data set. Nineteen new monitoring wells, including two Continuous Multilevel Tubes (CMT), were installed to further develop the geological conceptual model and identify crucial discontinuities in the aquitard units. This network was devised and installed by a team of hydrogeologists. Eight geologically and topographically diverse monitoring locations or “stations” had been previously established and monitored by Bekeris (2007) to track changes in soil nitrate mass within the unsaturated zone through successive geologic coring. This study involved the selection of seven new locations that were predicted to behave similarly to one of the original eight stations in order to assess the predictive capability of scaling up point measurements. The upscaling criteria were based primarily on near surface geology, topography and field observations, with the former being determined as exerting the greatest influence on the results. Recharge rates estimates were combined with unsaturated zone soil nitrate data obtained from geologic coring events to produce nitrate mass flux estimates. Four methods of scaling up point estimates of mass flux made at fourteen of the stations to produce mass loading estimates across the whole field site were compared. The best method displayed nitrate mass loading having decreased within Parcel B from 6.77 t/yr in May 2006 to 2.55 t/yr in May 2008 resulting in a total mass reduction rate of 4.20 t/yr or 62 % which verifies the effectiveness of the BMPs. This corresponds well with the 46% decrease in applied nitrogen associated with the BMP. Groundwater quality measured using standard monitoring wells with long screens indicated that nitrate concentrations have ceased to increase, while groundwater taken from the discrete sampling ports of the CMT wells shows significantly lower concentrations of nitrate within the ports located closer to the water table. This further validates the success of the BMPs but suggests that there is a long lag time between BMP implementation and the flushing of deeper aquifer zones with cleaner, recharging water. Despite the decrease in applied nitrogen, crop yields have remained at or above historical values. Three commonly applied vulnerability assessment methods including the Aquifer Vulnerability Index (AVI), Intrinsic Susceptibility Index (ISI) and Surface to Aquifer Advection Time (SAAT) were utilized to rank the vulnerability of the Thornton Well Field to surface contaminants. The results highlighted how complex hydrogeology may result in inconsistent rankings of vulnerability by each of the methods. The results from analyzing temperature and pressure data collected from pressure transducers within wells across the site suggest that these data can verify and improve the results from standardized vulnerability assessment techniques, especially during highly vulnerable snow melt events.