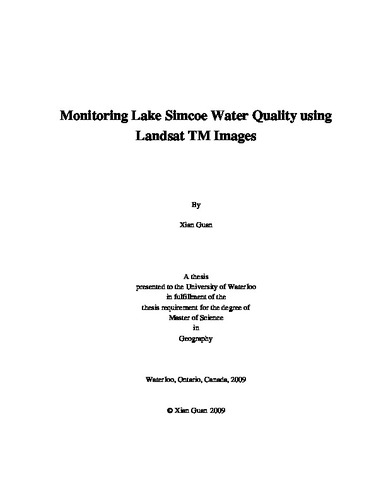 Inland lakes are important resources to humans, while the eutrophication effect caused by an overload of nutrients is a significant problem. This study focuses on utilizing the satellite remote sensing to monitor the water quality of Lake Simcoe, Ontario, Canada, which has been suffering from the overload of Total Phosphorus (TP) and therefore eutrophication for decades. The data employed in this study includes 22 cloud-free Landsat 5 TM images, as well as the nearly simultaneous in-situ data from 15 observation stations on the lake. Compared to the generally used model, an improved model is developed in this study to estimate the Secchi Disk Transparency (SDT), a parameter for water clarity measurements, using the TM images. Models based on different band combinations are compared to estimate the chlorophyll-a (chl-a) concentration. The results of these estimations are validated using the in-situ data by the linear regression analysis, and the accuracies are measured by the correlation coefficients R2. The results reveal that the improved SDT model provides higher prediction accuracies than the general model when applied to 68.2% (15 out of 22) of the images. The majority of the SDT predictions show high R2, whereas some of the estimated chl-a concentrations have weak relationships with the in-situ data. The possible reasons for this are the geo-location of stations, as well as the influences of chl-a and Dissolved Organic Carbon (DOC). The resultant concentration maps indicate that the eutrophic water is normally distributed at the near-shore areas and the northeastern part of Lake Simcoe. In addition, the southern Cook’s Bay has always been suffering from an extremely serious water quality problem even until now. Meanwhile, the water quality of the southwestern part of Lake Simcoe is much better than the other parts of this lake. The results also show that the water quality of Lake Simcoe was at its worst in August and September for the past 22 years while it was much better in the other sampling seasons. According to the trend of the monthly averaged SDT, on an overall scale, the SDT dropped from 1980 to 1982 and then kept relatively stable until the fall of 1992, followed by a gradual increase until 2000, and then stayed constant until the summer of 2008. The chl-a concentration reveals an inverse trend, i.e., the higher the chl-a concentration, the more turbid the water.