Across the River: A Library Reflected 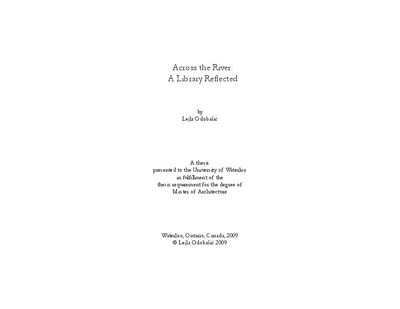 The thickening line crafted as a ‘temporary’ border thirteen years ago during the Dayton Peace Agreement –dividing Bosnia into Republika Srpska and the Federation of Bosniaks and Croats- is gaining an unsettling permanence in present-day Bosnia. As each of the three ethnic groups attempts to maintain their autonomy, they unwillingly share the divided country, while tangling the question of Bosnian identity into a perplexing web of religious and nationalistic ties. This thesis traces Bosnian history with a story of a singular building, the National Library. The library’s physical and programmatic changes parallel Bosnian political transformation through time. The destruction of the library during the siege of Sarajevo on many levels symbolizes the destruction of multicultural Bosnia as well. This thesis proposes a re-conceptualization of the Bosnian National Library as a new building where a dialogue between the segregated ethnic groups could to emerge through the use of a common shared secular space. This space will act as a point of cultural overlap that negates the idea of purity and homogeneity. Instead, through the building programme and its relationship with the city, the library will welcome diversity and encourage dialogue in order to attempt a dissolution of the boundaries between the group of inclusion and the “other”.