On the Verge: Activating Public Space in the Periphery 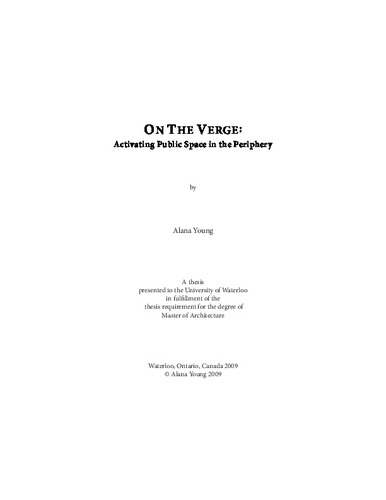 This thesis examines the suburban verge’s latent potential as an alternative public space. It is located between the boundaries of private properties and public streets, where territorial boundaries and ownership are unclear. The site for this thesis is the southeast quadrant of the intersection at Jane Street and Finch Avenue West in the former city of North York, now part of Toronto. The intersection reveals a fertile field of public activity that engenders new forms of social engagement and invites a reconsideration of public space in the urban periphery. A product of Modern planning, the suburban verge is a buffer between vehicles and pedestrians. Home to hydro poles, streetlights, small-scale furnishings and the ubiquitous cast-in-place concrete sidewalk, the suburban verge is a definitive element of the suburban landscape that accounts for a substantial amount of neglected public land. The suburban verge’s ambiguity attracts a variety of unsanctioned and informal activities. At Jane and Finch, socio-economic issues, a diverse population and escalating pressure to increase density further intensify this unscripted behaviour. This thesis calls attention to the unrealized potential of the suburban verge. It does not set out to create new public space; rather, it draws upon existing social patterns in order to enrich the suburban public realm. Subtle inflections in the existing terrain, deliberately modest in form and operation, expand the social and ecological capacity of the suburban verge and demonstrate the need to consider the potential of everyday practices as a vehicle for generating dynamic public space.