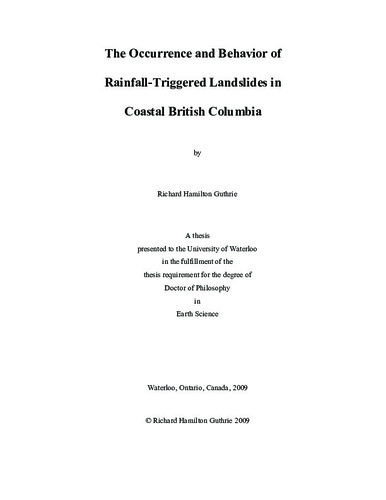 This thesis seeks to analyze the occurrence and behavior of rainfall-triggered landslides in coastal British Columbia. In particular, it focuses on the analysis of landslide temporal and spatial distributions occurrence and their magnitudes, and considers the major factors that influence regional landslide behavior. Implicit in the research is the understanding that the landscape of coastal BC is managed, and that landslides, in addition to occurring naturally may be caused by, and certainly impact, resources that are important to humankind. Underlying each chapter is the rationale that by better understanding the causes of, and controls on landslide occurrence and magnitude, we can reduce the impacts and lower the associated risk. Statistical magnitude-frequency relationships are examined in coastal BC. Observations suggest that landslides in coastal British Columbia tend to a larger size until about 10,000 m2 in total area. At this point larger landslides are limited by landscape controls according to a power law. Probabilistic regional hazard analysis is one logical outcome of magnitude-frequency analysis and a regional mass movement hazard map for Vancouver Island is presented. Physiographic controls on statistical magnitude-frequency distributions are examined using a cellular automata based model and results compare favorably to actual landslide behavior: modeled landslides bifurcate at local elevation highs, deposit mass preferentially where the local slopes decrease, find routes in confined valley or channel networks, and, when sufficiently large, overwhelm the local topography. The magnitude-frequency distribution of both the actual landslides and the cellular automata model follow a power law for magnitudes higher than 10,000 m2 - 20,000 m2 and show a flattening of the slope for smaller magnitudes. The results provide strong corroborative evidence for physiographic limitations related to slope, slope distance and the distribution of mass within landslides. The physiographic controls on landslide magnitude, debris flow mobility and runout behavior is examined using detailed field and air photograph analysis. The role of slope on deposition and scour is investigated and a practical method for estimating both entrainment and runout in the field, as well as in the GIS environment, is presented. Further controls on landslide mobility, including the role of gullies and stream channels, roads and benches and intact forests, are considered. The role of landslides in controlling landscape physiography is also examined. In particular, it is determined that moderate-sized landslides do the most work transporting material on hillslopes, defined by a work peak, and that magnitude varies based on local physiography and climate. Landslides that form the work peak are distinct from catastrophic landslides that are themselves formative and system resetting. The persistence time for debris slides/debris flows and rock slides/rock avalanches is calculated over six orders of magnitude and an event is considered catastrophic when it persists in the landscape ten times longer than the population of landslides that form the work peak. A detailed case study examines meteorological controls on landslide occurrence and the role of extreme weather is considered. A critical onset of landslide triggering rainfall intensity is determined to be between 80 mm and 100 mm in 24 hours and wind is determined to result in increased local precipitation. The role of rain-on-snow is also evaluated and determined to be crucial to landslide occurrence. Finally, a conceptual model of landslide-induced denudation for coastal mountain watersheds spanning 10,000 years of environmental change is presented. Recent human impacts are calculated for landslide frequencies over the 20th century. The impact of logging during the last 100 years is unambiguous; logging induced landslides almost doubles the effect frequency of the wettest millennia in the last 10,000 years. This suggests that the impact of logging outpaces that of climatic change. Debris slides and debris flows are estimated to have resulted in a landscape lowering of 0.7 m across the Vancouver Island during the last 10,000 years.