A Line in Motion 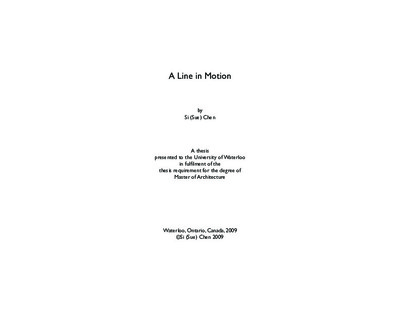 This is a graphic account, showing various spaces found in a work of Chinese calligraphy, using, for analysis, the work of contemporary calligrapher Noriko Maeda, historical examples by Wang Hui, Wang Xizhi, Wen Cheng Ming, Dong Qichang and Li Chun’s treatise on calligraphy, The 84 Laws. Chinese calligraphy is a spatial practice: a sensibility combining graphic design and kinesis. The Chinese character is a line graph centered within an imaginary square and written in a prescribed way using rules of stroke order, ensuring that the lines of a word are added systematically, and in the same order each time the word is painted. In Chinese calligraphy, the hand moves in the x- and y-axes – horizontally, vertically, laterally, diagonally – and the z-axis – up and down in relation to the paper. Stroke order ensures that no move is repeated successively. When a brush makes contact with a hard surface, the tip flexes, and the brush responds to a downward force; in this way, a brushstroke is a record of a hand gesture. Going beyond a two-dimensioned graphic, the brush makes active the up-and-down axis, the z-axis; writing is a gesture that operates in three dimensions: as one writes, the hand inscribes a physical space, moves circuitously over a spot while pushing and lifting the brush. But the Chinese character is also a descriptor of time. The five styles – Hsiao Chuan, Li, Tsao, Chen, Tsing – represent the evolution of the character form in its relation to the timing of the strokes. The calligrapher’s art is in his control of timing: in essence, knowing when to stop, when to go, and when to turn. Environmental and emotional circumstances affect the calligrapher’s sense of timing, so that every piece of calligraphy is unique, specific to the moment of its creation. A brush character is not a simple graphic, but rather, it is a notation of movement, mapping the passage of the hand over the page. A piece of calligraphy demonstrates a hand and brush in motion, the product of a moment’s creativity at a specific place and time.