Mass Transfer Mechanisms during the Solvent Recovery of Heavy Oil 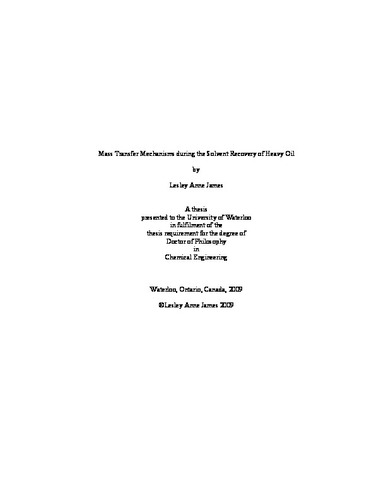 Canada has the second largest proven oil reserves next to Saudi Arabia which is mostly located in Alberta and Saskatchewan but is unconventional heavy oil and bitumen. The tar sands are found at the surface and are mined, yet 80% of the 173 billion barrels of heavy oil and bitumen exist in-situ according to the Canadian Association of Petroleum Producers (CAPP). Two factors inhibit the economic extraction and processing of Canadian heavy oil; its enormous viscosity ranging from 1000 to over 1 million mPa.s and the asphaltene content (high molecular weight molecules containing heavy metals and sulphur). Heavy oil and bitumen were only included in the reserves estimates through the efforts of Canadian enhanced oil recovery (EOR) research. Viscosity reduction is the one common element of in-situ methods of heavy oil recovery with the exception of cold production. Currently, steam assisted gravity drainage (SAGD) and cyclic steam stimulation (CSS) are being used commercially in the field where the oil’s viscosity is reduced by injecting steam. Thermal methods are energy intensive requiring vast volumes of water such that any improvement would be beneficial. Solvent extraction is one alternative requiring no water, the solvent is recoverable and reusable, and depending on the mode of operation the heavy oil is upgraded in-situ. Vapour Extraction (VAPEX) and enhanced solvent extraction (N-SolvTM) are two such methods. VAPEX and N-Solv reduce the bitumen’s viscosity via mass transfer and a combination of mass and heat transfer, respectively. A light hydrocarbon solvent (instead of steam) is injected into an upper horizontal well where the solvent mixes with the heavy oil, reduces its viscosity and allows the oil to drain under gravity to a bottom production well. The idea of using solvents for heavy oil extraction has been around since the 1970s and both VAPEX and N-Solv are patented processes. However, there is still much to be learned about how these processes physically work. Research to date has focused on varying system parameters (including model dimensions, permeability, heavy oil viscosity, solvent type and injection rate, etc.) to observe the effect on oil production from laboratory scale models. Based on an early mass balance model by Butler and Mokrys (1989) and an improvement by Das (1995), molecular diffusion alone cannot account for the produced oil rates observed from laboratory models. Until recently, very little progress had been made towards qualifying and quantifying the mass transfer mechanisms with the exception of the diffusivity of light hydrocarbons in heavy oil. Mass transfer can only be by diffusion and convection. Differentiating and quantifying the contribution of each is complex due to the nature and viscosity of the oil. The goal of this thesis is to investigate the mass transfer mechanisms during the solvent recovery of heavy oil. Quantifying the diffusion of light hydrocarbon solvents has been an active topic of research with limited success since the mid 1990’s. The experimental approach presented here focused on capturing the rate of solvent mass transfer into the bitumen by measuring the bitumen swelling and the butane uptake independently. Unlike early pressure decay methods, the pressure is held constant to not violate the assumed equilibrium solvent concentration at the interfacial boundary condition. The high solubility of solvent in heavy oil complicates the physical modeling because simplifying assumptions of a constant diffusion coefficient, constant density and a quiescent liquid should not be used. The model was developed from first principles to predict the bitumen swelling. The form of the concentration dependent diffusivity was assumed and the diffusivity coefficients initially guessed. The swelling (moving boundary) was fixed by defining a new dimensionless space coordinate and the set of partial differential equations solved using the method of lines. Using the non-linear regression (lsqnonlin) function in MATLAB®, optimising for the difference in predicted and experimentally found bitumen heights and independently validating the result using the solvent uptake, the diffusivity of butane in heavy oil (at 25oC) was found to be Dsb = 4.78 x 10-6ωs + 4.91 x 10-6 cm2/s where ωs is the solvent mass fraction. Diffusion alone has proven inadequate in predicting oil recovery rates from laboratory scale models. It is logical to assume that convective mass transfer plays a role at mixing the solvent and bitumen while draining via gravity through the reservoir porous matrix. Solvent extraction experiments were conducted in etched glass micromodels to observe the pore scale phenomena. The pore scale mechanisms were found to differ depending on how the solvent extraction was operated, with non-condensing (VAPEX) or condensing (N-SolvTM) solvent. Observations show increased convective mixing and an increased rate of interface advancement when the solvent condenses on the bitumen surface. Evidence of trapped butane vapour being mobilised with the draining live oil and a technique of observing solvent extraction using UV light confirm that the draining live oil is on average one pore deep. While the interface appears from a distance to be uniform, at the pore scale it is not. Live oil can drain from one to two pores via capillary displacement mechanisms in one section of the interface and via film flow only in another area (James and Chatzis 2004; James et al. 2008). This work also shows the detrimental impact of having a non-condensable gas present during solvent extraction (James and Chatzis 2008). In summary, this work emphasises the mass transfer and drainage displacement mechanisms of non-condensing (VAPEX) and condensing (N-Solv) solvent extraction methods of heavy oil recovery.