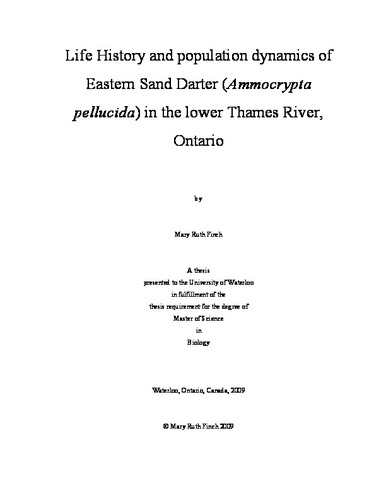 Eastern Sand Darter (Ammocrypta pellucida) is listed as Threatened under the Canadian Species at Risk Act. Canadian populations are declining primarily due to the siltation of sandy depositional areas, the preferred habitat of the species. Little other relevant biological information is available for most Canadian populations and only limited information is available for populations in the United States. To supplement the paucity of information, this study collected biological information on A. pellucida during field surveys in 2006- 2007 from 10 sites located around the Big Bend Conservation Area in the lower Thames River, Ontario, Canada. Collected data were used to estimate critical life history traits including: longevity, fecundity, clutch size and number, growth, survival, age-at-first-maturity and cohort age structure. Longevity was 3+ years, with age-at-first-maturity being 1+ for both sexes. A minimum of 2 clutches, were laid per year with an average clutch size of 71 eggs. Average density within in the study area was 0.36 ± 0.11 A. pellucida/m². Quantitative comparison of lower Thames River biological information with a more southerly A. pellucida population in the Little Muskingum River, Ohio, demonstrated little latitudinal variation between the populations. Data comparison suggests that localized environmental factors are affecting biological characteristics, in particular water temperature that may be controlled by differences in riparian cover and/or groundwater input. Field derived life history information was used to create a Leslie matrix model which was used for population viability analysis. Perturbation analyses of reproductive scenarios involving changes in clutch numbers and size and age-at-first maturity found large variations in the finite rate of population growth. Elasticity analyses further indicated that 0+ survival and 1+ fertility were the limiting life history parameters. Thus allowing fish to survive until first reproduction would have the largest overall impact on improving population viability. Inclusion of environmental stochasticity in the model facilitated estimation of extinction probabilities in the range of 0.13 to 0.21 within 100 years. Based on the above, it is recommended that management activities for protection and restoration of A. pellucida focus on habitat protection of nursery and spawning areas.