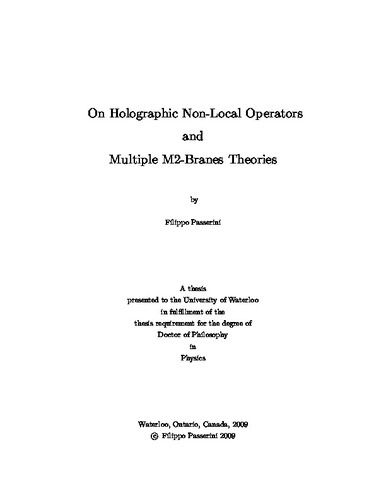 Gauge-string duality has provided a powerful framework for the study of strongly coupled gauge theories and non-perturbative string models. This thesis analyzes the holographic description of non-local gauge theory operators and some aspects of the Bagger-Lambert theory. The latter, as a proposal for a multiple M2-branes effective theory, is conjectured to be the holographic dual of a compactification of M-theory. We show that all half-BPS Wilson loop operators in N=4 SYM - which are labeled by Young tableaus - have a gravitational dual description in terms of D5-branes or alternatively in terms of D3-branes in AdS5xS5. We prove that the insertion of a half-BPS Wilson loop operator in the N=4 SYM path integral is achieved by integrating out the degrees of freedom on a configuration of bulk D5-branes or alternatively on a configuration of bulk D3-branes. We construct a new class of supersymmetric surface operators in N=4 SYM and find the corresponding dual supergravity solutions. Consistency requires constructing N=4 SYM in the D7 supergravity background and not in flat space. This enlarges the class of holographic gauge theories dual to string theory backgrounds to gauge theories in non-trivial supergravity backgrounds. We write down a maximally supersymmetric one parameter deformation of the field theory action of Bagger and Lambert and we show that this theory on RxT2 is invariant under the superalgebra of the maximally supersymmetric Type IIB plane wave. It is argued that this theory holographically describes the Type IIB plane wave in the discrete light-cone quantization (DLCQ). Finally, we show by explicit computation that the Bagger-Lambert Lagrangian realizes the M2-brane superalgebra, including also two p-form central charges that encode the M-theory intersections involving M2-branes.