Is Tourism the Solution to Rural Decline? Evaluating the "Promise of Rural Tourism" to Close the Gap between Rhetoric and Practice 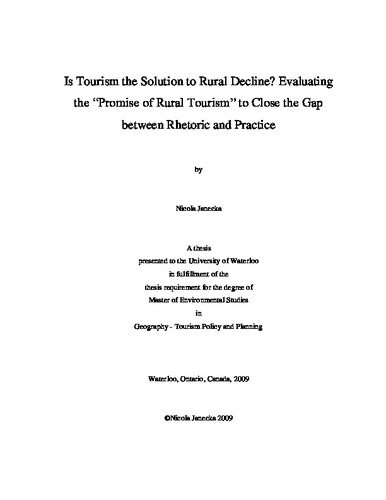 Rural areas across the developed world have encountered economic decline due to trends of industrialisation and urbanisation (Lane, 1994). The damaging effects of the declining economy have persuaded governments to recognize these problems and tourism has been presented as a catalyst to revitalize disadvantaged rural areas (Riberio & Marques, 2002). Tourism often represents a means of generating revenue and increasing employment opportunities. Today, the idea that tourism will save disadvantaged rural areas has grown into a widely agreed upon notion, which is reflected in a vast range of policy documents. This thesis has questioned whether the promise of rural tourism to contribute to local community development has surfaced as a result of over optimism. The purpose of this study was to determine if tourism is a viable tool for development in rural areas by stepping back and evaluating what is really happening in practice in rural areas. This study examined if, and to what extent, the reported benefits of rural tourism are realized on the ground at the local community level. However, there is little to be gained by examining the impacts of tourism without examining the processes which have contributed to the creation and growth of rural tourism. This research consisted of a close examination of the rural tourism development process and the impacts of its development in a rural village in the Czech Republic. Data were collected through semi-structured interviews, household survey questionnaires, secondary data analysis and finally, participant observation. The analysis of the data revealed four main themes, which include: (1) the nature of tourism development, (2) the impacts of tourism, (3) the role of tourism, and (4) the future of tourism development. The findings of this research showed that residents held a favourable view towards tourism development and are supportive of future tourism development. Tourism is attributed to the many positive changes that have occurred in the village. Moreover, residents reported valuing the social contributions of tourism more than the economic contributions. It was revealed that there is an awareness future tourism planning and monitoring is needed, however, there is a distinct lack of organized tourism planning in the village. The study concluded that tourism’s promise of providing development potential to rural communities, as outlined, remains partially unfulfilled. Residents have a realistic grasp on the role of tourism in their village and as such, realize that tourism is currently not a viable development option for their village. This study demonstrates that it should not be assumed that rural economic development is a natural outcome of rural tourism.

Nicola Janecka (2009). Is Tourism the Solution to Rural Decline? Evaluating the "Promise of Rural Tourism" to Close the Gap between Rhetoric and Practice. UWSpace. http://hdl.handle.net/10012/4467