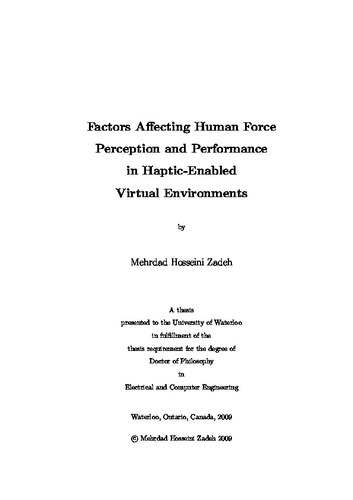 Haptic technology enables computer users to touch and/or manipulate virtual objects in virtual environments (VEs). Similar to other human-in-the-loop applications, haptic applications require interactions between humans and computers. Thus, human-factors studies are required to recognize the limitations and capabilities of the user. This thesis establishes human-factors criteria to improve various haptic applications such as perception-based haptic compression techniques and haptic-enabled computer-aided design (CAD). Today, data compression plays a significant role in the transmission of haptic information since the efficient use of the available bandwidth is a concern. Most lossy haptic compression techniques rely on the limitations of human force perception, and this is used in the design of perception-based haptic compression techniques. Researchers have studied force perception when a user is in static interaction with a stationary object. This thesis focuses on cases where the human user and the object are in relative motion. The limitations of force perception are quantified using psychophysical methods, and the effects of several factors, including user hand velocity and sensory adaptation, are investigated. The results indicate that fewer haptic details need to be calculated or transmitted when the user's hand is in motion. In traditional CAD systems, users usually design virtual prototypes using a mouse via their vision system only, and it is difficult to design curved surfaces due to the number, shape, and position of the curves. Adding haptics to CAD systems enables users to explore and manipulate virtual objects using the sense of touch. In addition, human performance is important in CAD environments. To maintain the accuracy, active haptic manipulation of the user response can be incorporated in CAD applications. This thesis investigates the effect of forces on the accuracy of movement in VEs. The results indicate that factors such as the base force intensity and force increment/decrement can be incorporated in the control of users' movements in VEs. In other words, we can pull/push the users' hands by increasing/decreasing the force without the users being aware of it.