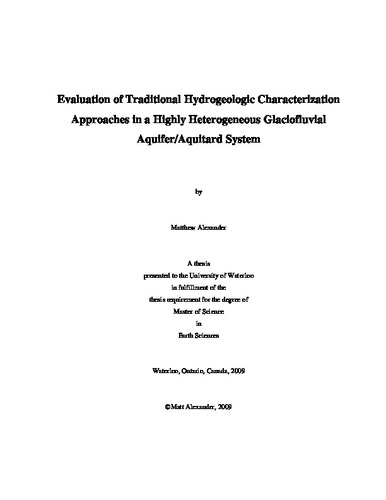 The purpose of this study was to evaluate the effectiveness of traditional hydrogeologic characterization approaches in a highly heterogeneous glaciofluvial aquifer at the North Campus Research Site (NCRS), situated on the University of Waterloo campus. Continuous soil cores to a depth of approximately 18 m were collected during the installation of the CMT monitoring wells and the multi-screen pumping well. K estimates were obtained for the core by obtaining 471 samples and testing them with a falling head permeameter, as well as by utilizing empirical equations developed to estimate K. A geostatistical analysis performed on the K datasets yielded strongly heterogeneous kriged K fields for the site. K and Ss were also estimated via type curve analysis of slug and pumping test data collected at the site. The various K and Ss estimates were then evaluated by simulating the transient drawdown data using a 3D forward numerical model constructed using Hydrogeosphere (Therrien et al., 2005). Results showed that, while drawdown predictions generally improved as more complexity was introduced into the model, the ability to make accurate drawdown predictions at all of the CMT ports was inconsistent. These results suggest that new techniques may be required to accurately capture subsurface heterogeneity for improved predictions of flow in similar systems.