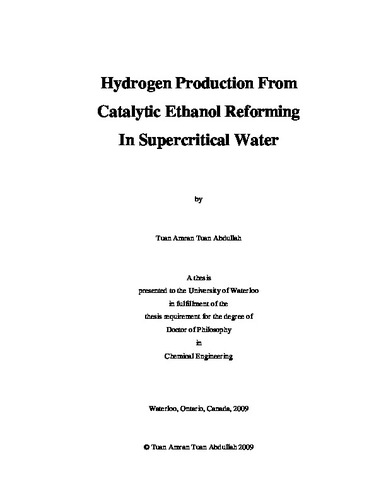 As a means to produce high pressure hydrogen in order to reduce compression penalty, we propose to reform liquid fuel (e.g., bio-ethanol) in supercritical water (pressure above 221 bar and temperature greater than 374°C). Catalytic ethanol reforming in supercritical water for hydrogen production has been carried out in a high pressure packed bed reactor made of Inconel-625. Since Inconel-625 contains mainly nickel, it is expected that the reactor itself can be active toward ethanol reforming. Therefore, a series of tests were first performed in the empty reactor, whose results are a benchmark when studying reforming in the presence of a catalyst. Ethanol reforming in the empty reactor was studied in the temperature range of 450 to 600°C and showed coking/plugging problem at 575°C and above. The ethanol conversion with the empty reactor could be as high as 25% at 550°C and residence time of about one minute. The main reaction products with the empty reactor were H2, CO and CH4. A catalyst screening study was performed to investigate the performance of nickel and cobalt as active metals, supported on γ-Al2O3, α-Al2O3, ZrO2 and YSZ for temperatures between 475°C and 550°C. The presence of the catalyst did increase the activity of ethanol reforming, especially at higher temperatures. All experiments in the catalyst screening study were carried out with non-reduced catalysts. Nickel catalysts were found more active than cobalt, likely because of higher reducibility. Indeed, the higher amount of oxygen in Co3O4 compared to NiO requires more hydrogen to fully reduce the metal oxides. Both Ni/γ-Al2O3 and Co/γ-Al2O3 showed little activity below 500°C, and led to failed experiments due to coking/plugging at temperatures of 525°C and above. The strong acid sites on γ-Al2O3 are responsible for high selectivity toward ethylene, a known coke precursor. The support α-Al2O3 in combination with Ni was active, but yielded lower H2 selectivity and higher CH4 selectivity than the zirconia-based catalysts. The Co/α-Al2O3 shows low activity. The ZrO2-based catalysts were active and yielded high H2 selectivity, but were found very fragile. Finally, the YSZ support was strong and yielded good conversion. Below 550°C the activity of Ni/YSZ is higher than that of Co/YSZ, but at 550°C both catalysts yield nearly complete conversion. The advantage of Co/YSZ is then higher H2 selectivity and lower CH4 selectivity compared to Ni/YSZ. Therefore, Co/YSZ was selected for a more detailed study. The effect of temperature, flowrate, residence time, catalyst weight, Co loading, concentration, and pretreatment with H2 were considered. Two methods for catalyst reduction were applied: ex-situ reduction where the catalyst is reduced in a different reactor and in-situ reduction where the catalyst is reduced in the SCW reactor prior to ethanol reforming. At 550°C, Co/YSZ converts all ethanol for residence times as low as 2 s, even with non-reduced catalyst. At 500°C the activity of the in-situ and ex-situ reduced catalysts were similar and greater than for the non-reduced catalyst. At 475°C the ex-situ reduced catalyst showed low activity, comparable to that of the non-reduced catalyst, but the in-situ reduced catalyst yielded much higher conversion. The better performance of the in-situ reduced catalyst was attributed to active metal sites on the reactor’s wall after pre-treatment in H2. The low activity of the ex-situ reduced catalyst is due to the fact that, when exposed to supercritical water for less than 30 minutes, it re-oxidized to CoO. The temperature of 475°C is then too low to generate sufficient hydrogen that will start reducing the catalyst. Finally, analysis of reaction pathways for ethanol reforming over Co/YSZ showed that the reaction proceeds mostly via ethanol dehydrogenation to form acetaldehyde, the latter species reacting with lattice oxygen on the catalyst to produce acetone and CO2. Acetone is then reformed by water into CO and H2. Finally, H2 and CO react via the methanation reaction to form CH4. Over Co/YSZ it was found that the water-gas shift reaction is fast (CO selectivity most of the time is less than 0.5%), but the methanation reaction is kinetically controlled. Stopping the methanation reaction before equilibrium allowed for H2 selectivity higher than what is expected at equilibrium (likewise, CH4 selectivity is smaller than equilibrium value). For well-controlled reaction Co/YSZ is a promising catalyst that can be highly selective toward hydrogen during ethanol reforming in supercritical water.