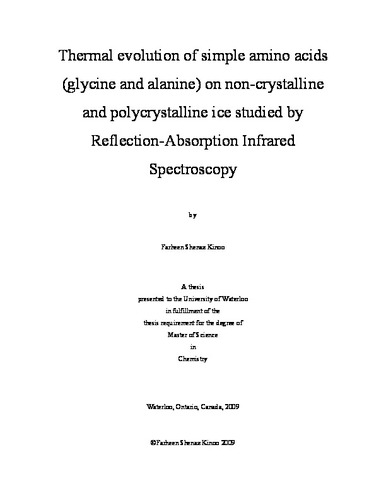 The behaviour of glycine and alanine, deposited under ultrahigh vacuum conditions onto non-crystalline ice (NCI) and polycrystalline ice (PCI) has been studied using Reflection-Absorption Infrared Spectroscopy (RAIRS). The adsorption of these molecules onto a clean polycrystalline Cu surface at 123 and 298 K has also been investigated. Both amino acids remain intact upon landing on the NCI and PCI surfaces and are present the neutral or form on these ice surfaces. Bonding to the surface occurs through the carboxylic group and the amino group initially, with the C=O and NH2 groups involved in hydrogen bonding to the dangling OH bond of the ice surface. Multilayers are formed at higher exposure, resulting in intermolecular hydrogen bonding between the amino acid species. Upon annealing these fully covered surfaces to 150 K, the proton transfer process begins, as evidenced by the disappearance of the C=O stretching vibration band at 1712 cm-1. This phenomenon continues until the ice film is completely removed from the surface. Consequently the amino acid binds to the metal surface as a zwitterionic species. The adsorbed species then leave the surface as the substrate is annealed to higher temperature. In addition, it was shown that amino acid molecules adsorbed on the NCI do not restrict crystallization of the ice film, as supported by the appearance of the characteristic PCI ν(OH) band at 3292 cm-1 during annealing.