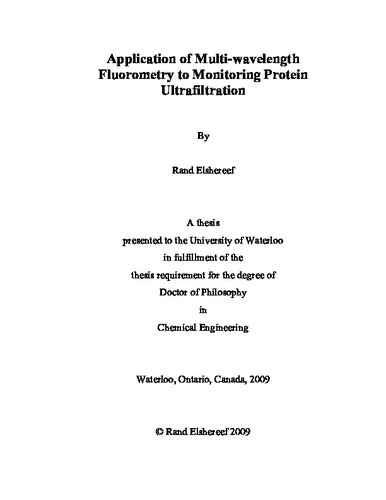 Membrane filtration of protein solutions is influenced by a wide range of processing and physicochemical conditions. Monitoring and optimizing membrane filtration may have advantages for achieving, in a cost effective manner, improved bioproduct purification and membrane performance which is relevant to pharmaceutical and biochemical applications. The motivation of this work was to examine the feasibility of applying two-dimensional fluorescence spectroscopy in conjunction with chemometric techniques for monitoring and possibly optimizing the performance of membrane processes. Preliminary work focused on assessing the use of multivariate calibration tools in conjunction with the sensitivity of intrinsic protein fluorescence towards changes in environmental conditions was to predict protein concentration and aggregation behavior. A model protein, β-lactoglobulin (β-LG), was used as a first simple case scenario. Results showed very good agreement between the fluorescence based predictions and measurements obtained by HPLC and gravimetric analysis regardless of the conditions. PLS analysis of excitation-emission matrices revealed unique spectral fingerprints that are most likely associated with the heat-induced denaturation and aggregation. Standard Normal Variate, a signal preprocessing and filtering tool, was shown to have a significant effect on enhancing the predictive accuracy and robustness of the PLS model as it reduced the effect of instrumental noise. The methodology was then extended to a two-component protein system consisting of α- lactlalbumin (α-LA) and β-lactoglobulin (β-LG). The process of thermal induced aggregation of β-LG and α-LA protein in mixtures, which involves the disappearance of native-like proteins, was studied under various treatment conditions including different temperatures, pH, total initial protein concentration and proportions of α-LA and β-LG. A Partial Least Squares (PLS) regression algorithm was used to correlate the concentrations of α-LA and β-LG to the fluorescence spectra obtained for mixtures.The results illustrated that multivariate models could effectively deconvolute multiwavelength fluorescence spectra collected for the protein mixtures and thereby provide a fairly accurate quantification of respective native-like α-LA and β-LG despite the significant overlap between their emission profiles. It was also demonstrated that a PLS model could be used as a black-box prediction tool for estimating protein aggregation when combined with simple mass balances. Ultrafiltration experiments of the whey protein isolate solutions were carried out in dead-end filtration mode and fluorescence measurements of permeate and retentate solutions were acquired in synchronous scanning mode using a fiber optic probe. By implementing a dilution strategy for the retentate side, the fluorescence based PLS model encompassed a low protein concentration range where fluorescence was not expected to be significantly influenced by concentration-dependent interferences. It was also demonstrated that synchronous spectra can provide good predictions and consequently the use of the full spectrum may not be necessary for monitoring with corresponding savings in acquisition time. Membrane performance variables that are difficult to measure, such as individual protein transmission and membrane selectivity could be estimated directly from fluorescence-based predictions of protein concentrations in the retentate and permeate streams. Multiwavelength light scattering spectra, acquired using the fiber optic probe, were shown to be a useful indicator for protein self-association behavior, which is known to influence the membrane filtration. High fouling potential were observed for protein solutions that exhibited significant Rayleigh scattering. A predictive PLS model for estimating protein aggregation from Rayleigh scattering measurements was developed and it was tested by using molecular weight experimental values obtained from the literature. Although this comparison was only partial due to the limited amount of molecular weight data available, the findings verified the possibility of estimating the aggregate size from multiwavelength Rayleigh scattering spectra acquired using a conventional spectrofluorometer. Thus, the results implied that both intrinsic fluorescence and light scattering multiwavelength measurements could provide complementary information about the filtration process.