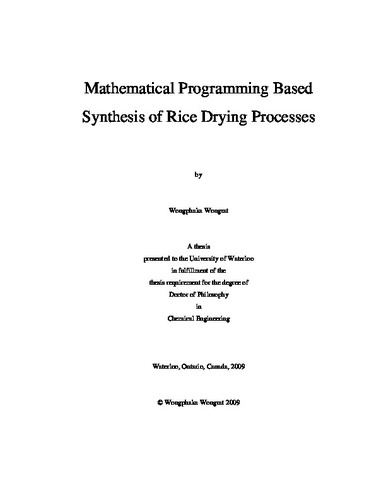 Various drying models have been developed in the extent which they are available for the analysis of drying processes in a variety of practical drying systems. However, most were focused only on a single unit operation; mainly the dryer. Nevertheless other unit operations such as cooling and tempering units are also employed in industrial drying systems. Therefore, there is an important need for an integrated analysis of rice drying systems which takes into account all the interactions between the units that appear in a drying process. The aim is to select a process out of the large number of alternatives and operating conditions which meet the specified performance. In this work, the synthesis problem of drying processes will be thoroughly investigated using various drying models. Both simplified (empirical) and rigorous (theoretical) models were used. The aim is to find the optimum configuration and operating conditions which satisfy two optimization criteria. One is to maximize the quality (head rice yield) and the other is to minimize the energy consumption. To solve the synthesis problem, mathematical programming will be used as a tool. Three major steps involving the application of mathematical programming in synthesis problems were developed and presented; superstructure representation, problem formulation and optimization strategy. For the synthesis problem using empirical models, the problem was formulated as an MINLP model. However, due to the fact that different mathematical models are often possible for the same synthesis problem and the recent advances in modeling techniques, generalized disjunctive programming (GDP), known as an alternative model to MINLP, was used. The objectives are to investigate the benefit of using GDP as an alternative model to MINLP and also to exploit a disjunction part of a GDP model for integrating alternative choices of empirical drying models to eliminate the problem of having drying models which are valid only in a small range of operating conditions. The results showed that different drying strategies were obtained from using different drying models in the case of maximum head of rice yield (quality) while the same strategies have been found from using different drying models in the case of minimum energy consumption. This finding is due to the reason that quality as an objective function is highly nonlinear; therefore it contains many local solutions while the energy objective function is a simple linear function. In the aspect of using GDP model, we found that GDP models provide good structure of variable relationships which can improve the search strategy and solution efficiency for the problem dealing with highly nonlinear functions such as in the case of maximum head price yield. Moreover, because of this good characteristic of MINLP based GDP model, the synthesis problem of rice drying processes dealing with various kinds of empirical models can be solved in reasonable time in GAMS. Nonetheless, in the case that the optimization problem is dealing with the simple mathematical function, the GDP model did not outperform the ad hoc MINLP model for the case of minimizing energy consumption. Also, GDP modeling framework facilitated the problem formulation of the synthesis problem which had two drying models valid in a different range of drying operations in rice drying processes. The synthesis problem using theoretical models arising from the simultaneous heat and mass transfer balances gave rise to a mixed-integer nonlinear programming (MIDO) model. Such problem is highly nonlinear, multimodal and discontinuous in nature and is very difficult to solve. A hybrid method which combines genetic algorithms (GAs) and control vector parameterization (CVP) approach was proposed to solve this problem. In the case of maximum head rice yield, the results of the synthesis problem showed that high quality rice grain can be preserved regardless of the choice of drying configuration as long as the drying process is operated under a condition which produces the least amount of moisture gradient within the rice grain. Many local optimum solutions which gave rise to different drying configurations and operating policies were found from using different initial guesses. In the case of minimum energy consumption, the results showed that a cooling-tempering configuration which operates at ambient temperature gave the minimum energy consumption. Different initial guesses converged to the same drying configuration (cooling-tempering) but different operating policies and total number of passes. Moreover, since the optimal operating time in a cooling unit is at the upper operating bound allowed in this unit, the effect of the bound of operating time for a cooling unit on the total number of passes required was studied. The results showed that less number of passes would be obtained if longer periods of cooling are allowed. The hybrid proposed method was able to solve MIDO problems; albeit at a relatively large computational expense. For the comparison aspect between the theoretical and empirical models for synthesis of rice drying processes, empirical models are easier to use for the synthesis problem but they are valid only within the range which they were developed. Also, there is a need for developing a model for each particular unit employed in rice drying processes. For the synthesis problem with theoretical models, this problem gives rise to the most difficult class of optimization problems; however, a theoretical model provides a better understanding of the drying kinetics happening in rice grain. Moreover, theoretical models alleviate the need to develop models for each particular unit employed in rice drying systems. The common feature found from using theoretical and empirical models is that head rice yield objective function always gives rise to different choices of drying configurations while the energy objective function always give rise to a unique drying configuration (cooling-tempering). Different drying strategies have been found from using different drying models. These alternative configurations provide a broader vision on the operation of drying systems. To decide which one is the best, other factors must be taken into account such as investment cost, term of uses and available technology.