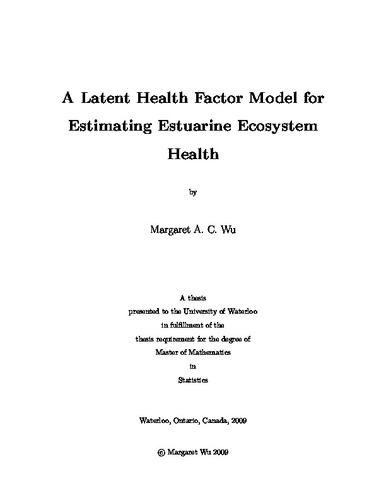 Assessment of the “health” of an ecosystem is often of great interest to those interested in monitoring and conservation of ecosystems. Traditionally, scientists have quantified the health of an ecosystem using multimetric indices that are semi-qualitative. Recently, a statistical-based index called the Latent Health Factor Index (LHFI) was devised to address many inadequacies of the conventional indices. Relying on standard modelling procedures, unlike the conventional indices, accords the LHFI many advantages: the LHFI is less arbitrary, and it allows for straightforward model inference and for formal statistical prediction of health for a new site (using only supplementary environmental covariates). In contrast, with conventional indices, formal statistical prediction does not exist, meaning that proper estimation of health for a new site requires benthic data which are expensive and time-consuming to gather. As the LHFI modelling methodology is a relatively new concept, it has so far only been demonstrated (and validated) on freshwater ecosystems. The goal of this thesis is to apply the LHFI modelling methodology to estuarine ecosystems, particularly to the previously unassessed system in Richibucto, New Brunswick. Specifically, the aims of this thesis are threefold: firstly, to investigate whether the LHFI is even applicable to estuarine systems since estuarine and freshwater metrics, or indicators of health, are quite different; secondly, to determine the appropriate form that the LHFI model if the technique is applicable; and thirdly, to assess the health of the Richibucto system. Note that the second objective includes determining which covariates may have a significant impact on estuarine health. As scientists have previously used the AZTI Marine Biotic Index (AMBI) and the Infaunal Trophic Index (ITI) as measurements of estuarine ecosystem health, this thesis investigates LHFI models using metrics from these two indices simultaneously. Two sets of models were considered in a Bayesian framework and implemented using Markov chain Monte Carlo techniques, the first using only metrics from AMBI, and the second using metrics from both AMBI and ITI. Both sets of LHFI models were successful in that they were able to make distinctions between health levels at different sites.