On the Border: an architectural inquiry into the sacred and quotidian 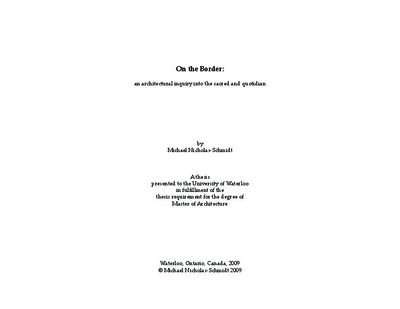 Even in our secular age, the sacred continues to be a powerful cognitive space in the landscape of the imagination. I am a Roman Catholic and amongst those who struggle to exist both in the structured universe of the sacred, and the contemporary plurality of the city. The mystery of the incarnation provides a theological argument for the indwelling of the Spirit in creation through time. With the advent of secularism however, it is possible to conceive of a time outside the sacred. Tension within theology in academia, faith in politics, or religion in a pluralistic society, reveals a boundary between our beliefs and our public face which becomes a rigid barrier – distinct as the private and public. Conflicting temporal structures of the sacred and secular give definition to this divide. Architecture has historically placed itself as interlocutor, negotiating complex thresholds in order to engage meaning. Contemporary sacred architecture, however, has avoided confrontation with the public realm. Thick edges distinguish the realms of the sacred and the quotidian. This thesis engages the border between the sacred and the secular. An analysis of the temporal structures of contemporary sacred space and its civic environment opens up an exploration of one such border around St. Basil’s Church in Toronto. The definition of a threshold at this edge challenges our contemporary divide by exploring potential transitions. Between the church and the street, architecture inhabits the edge, expanding and articulating connections. Methods are explored for constructing built forms which promote a transition between, and interaction of, sacred and secular temporalities. At this threshold, individual creativity provides metaphors for ontology. Crossing this threshold creates opportunities for overlap between the time of the sacred and the time of the secular. These transitions challenge how we imagine both the church and the city in contemporary architecture.

Michael Nicholas-Schmidt (2009). On the Border: an architectural inquiry into the sacred and quotidian. UWSpace. http://hdl.handle.net/10012/4420