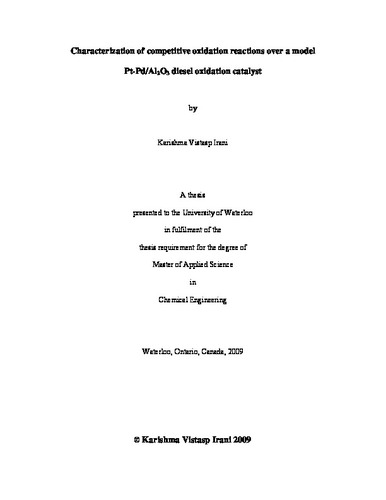 There has been a growing interest in using lean-burn engines due to their higher fuel economy and associated lower CO2 emissions. However, there are challenges in reducing NOX in an O2-rich (lean-burn) exhaust, and in low temperature soot oxidation. NOX storage/reduction (NSR) and selective catalytic reduction (SCR) are commercial NOX reduction technologies, and both are more efficient with levels of NO2 that are higher than those that are in engine exhaust (engine-out NO2 levels are ~10% of the total NOX). Therefore diesel oxidation catalysts are installed upstream of these technologies to provide NO2 through NO oxidation. The motivation behind this research project was two-fold. The first was to gain a better understanding of the effect of hydrocarbons on NO oxidation over a monolithic diesel oxidation catalyst. The second was to spatially resolve competitive oxidation reactions as a function of temperature and position within the same diesel oxidation catalyst (as that used in the first part). A technique known as spatially resolved capillary-inlet mass spectrometry (SpaciMS) was used to measure the gas concentrations at various positions within the catalyst. Diesel engine exhaust contains a mixture of compounds including NO, CO and various hydrocarbons, which react simultaneously over a catalyst, and each can influence the oxidation rates of the others. While studying the effect of hydrocarbons on NO oxidation in this project, propylene was found to have an apparent inhibition effect on NO oxidation, which increased with increasing propylene concentration. This apparent inhibition is a result of the NO2, as a product of NO oxidation, reacting with the propylene as an oxidant. Experiments with NO2 demonstrate a significant temperature decrease in the onset of NO2 reduction when propylene was present, which decreased further with increasing amounts of propylene, verifying NO2 as an oxidant. Similar results were observed with m-xylene and dodecane addition as well. The results also demonstrate that NO2 was consumed preferentially relative to O2 during hydrocarbon oxidation. With low inlet levels of O2, it was evident that the addition of NO2 had an apparent inhibition effect on propylene oxidation after the onset of NO2 reduction. This subsequent inhibition was due to the NO formed, demonstrating that C3H6 results in reduced NO2 outlet levels while NO inhibits C3H6 oxidation. The development of new models as well as validation of existing models requires the ability to spatially resolve oxidation reactions within a monolith. Spatially-resolved data will also give catalyst manufacturers insight into the location of active fronts, thereby directing the design of more efficient catalysts. In this research project, spatially resolving the oxidation reactions demonstrated that H2 and CO are oxidized prior to C3H6 and C12H26 and clearly show back-to-front ignition of the reductant species. An enhancement in NO oxidation was observed at the same time as dodecane oxidation light off, likely related to dodecane partial oxidation products.