Flow Separation on the β-plane 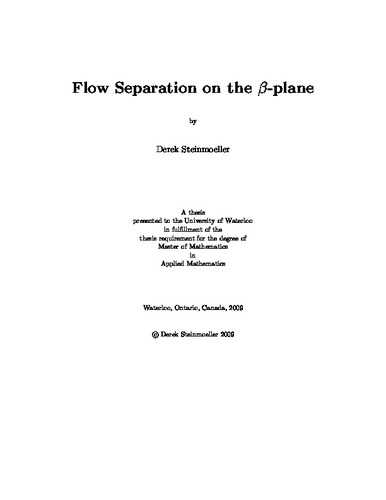 In non-rotating fluids, boundary-layer separation occurs when the nearly inviscid flow just outside a viscous boundary-layer experiences an appreciable deceleration due to a region of adverse pressure gradient. The fluid ceases to flow along the boundary due to a flow recirculation region close to the boundary. The flow is then said to be "detached." In recent decades, attention has shifted to the study of boundary-layer separation in a rotating reference frame due to its significance in Geophysical Fluid Dynamics (GFD). Since the Earth is a rotating sphere, the so-called β-plane approximation f = f0 + βy is often used to account for the inherent meridional variation of the Coriolis parameter, f, while still solving the governing equations on a plane. Numerical simulations of currents on the β-plane have been useful in understanding ocean currents such as the Gulf Stream, the Brazil Current, and the Antarctic Circumpolar Current to name a few. In this thesis, we first consider the problem of prograde flow past a cylindrical obstacle on the β-plane. The problem is governed by the barotropic vorticity equation and is solved using a numerical method that is a combination of a finite difference method and a spectral method. A modified form of the β-plane approximation is proposed to avoid computational difficulties. Results are given and discussed for flow past a circular cylinder at selected Reynolds numbers (Re) and non-dimensional β-parameters (β^). Results are then given and discussed for flow past an elliptic cylinder of a fixed aspect ratio (r = 0.2) and at two angles of inclination (90°, 15°) at selected Re and β^. In general, it is found that the β-effect acts to suppress boundary-layer separation and to allow Rossby waves to form in the exterior flow field. In the asymmetrical case of an inclined elliptic cylinder, the β-effect was found to constrain the region of vortex shedding to a small region near the trailing edge of the cylinder. The shed vortices were found to propagate around the trailing edge instead of in the expected downstream direction, as observed in the non-rotating case. The second problem considered in this thesis is the separation of western boundary currents from a curved coastline. This problem is also governed by the barotropic vorticity equation, and it is solved on an idealized model domain suitable for investigating the effects that boundary curvature has on the tendency of a boundary current to separate. The numerical method employed is a two-dimensional Chebyshev spectral collocation method and yields high order accuracy that helps to better resolve the boundary-layer dynamics in comparison to low-order methods. Results are given for a selection of boundary curvatures, non-dimensional β-parameters (β^), Reynolds numbers (Re), and Munk Numbers (Mu). In general, it is found than an increase in β^ will act to suppress boundary-layer separation. However, a sufficiently sharp obstacle can overcome the β-effect and force the boundary current to separate regardless of the value of β^. It is also found that in the inertial limit (small Mu, large Re) the flow region to the east of the primary boundary current is dominated by strong wave interactions and large eddies which form as a result of shear instabilities. In an interesting case of the inertial limit, strong waves were found to interact with the separation region, causing it to expand and propagate to the east as a large eddy. This idealized the mechanism by which western boundary currents such as the Gulf Stream generate eddies in the world's oceans.