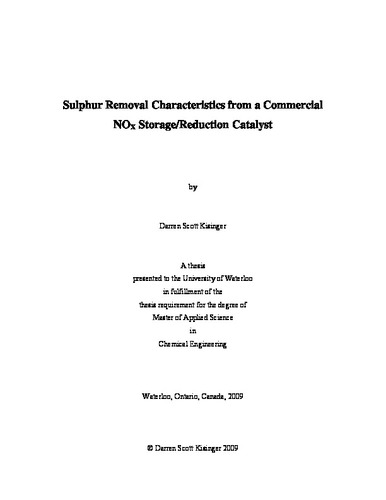 The ability to effectively remove sulphur from sulphur-poisoned NOx storage/reduction (NSR) catalysts, while minimizing associated fuel penalties and thermal degradation, is important for commercial application of NSR catalysts. As long as sulphur remains in the fuel or lubrication oil formulations, deactivation of NSR catalysts will persist. In an attempt to more fully understand the mechanism of sulphur removal and the associated operating conditions necessary to efficiently decompose sulphates, various gas compositions, temperatures and desulphation methodologies were applied to a commercially supplied catalyst. Experiments were conducted using a pilot scale plug flow catalytic reactor. FTIR spectroscopy and mass spectrometry were used to measure key sulphur species concentrations. Three groups of experiments were conducted. In the first, the effect of gas composition on the amount of sulphur removed from the catalyst was evaluated. In the latter two, high flow cycling desulphation and low flow cycling desulphation were compared. The most effective desulphation gas composition was achieved through the combination of high concentrations of H2, CO and C3H6 and also the inclusion of CO2 and H2O, which released up to 91% of the stored sulphur. The commercial catalyst tested is designed for a dual-leg process. Dual-leg systems are advantageous over single-leg systems in that engine modifications are unnecessary for catalyst regeneration, thereby minimizing losses in vehicle performance. It was found that under conditions appropriate for that application, catalyst desulphation is dominated by the amount of residual surface oxygen. Through the use of short lean phase cycling, to prevent oxygen saturation, the dual-leg application proved effective for sulphate removal, inducing 69% sulphur release compared to 51% when the surface was saturated with oxygen. Multiple stabilities of sulphur exist on the catalyst, which led to residual catalyst sulphates after many desulphations.