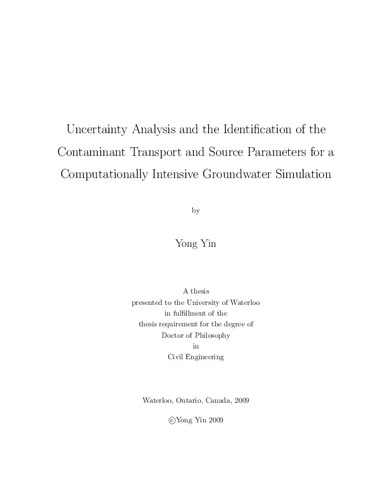 Transport parameter estimation and contaminant source identification are critical steps in the development of a physically based groundwater contaminant transport model. Due to the irreversibility of the dispersion process, the calibration of a transport model of interest is inherently ill-posed, and very sensitive to the simplification employed in the development of the lumped models. In this research, a methodology for the calibration of physically based computationally intensive transport models was developed and applied to a case study, the Reich Farm Superfund site in Toms River, New Jersey. Using HydroGeoSphere, a physically based transient three-dimensional computationally intensive groundwater flow model with spatially and temporally varying recharge was developed. Due to the convergence issue of implementing saturation versus permeability curve (van Genuchten equation) for the large scale models with coarse discretization, a novel flux-based method was innovated to determined solutions for the unsaturated zone for soil-water-retention models. The parameters for the flow system were determined separately from the parameters for the contaminant transport model. The contaminant transport and source parameters were estimated using both approximately 15 years of TCE concentration data from continuous well records and data over a period of approximately 30 years from traditional monitoring wells, and compared using optimization with two heuristic search algorithms (DDS and MicroGA) and a gradient based multi-start PEST. The contaminant transport model calibration results indicate that overall, multi-start PEST performs best in terms of the final best objective function values with equal number of function evaluations. Multi-start PEST also was employed to identify contaminant transport and source parameters under different scenarios including spatially and temporally varying recharge and averaged recharge. For the detailed, transient flow model with spatially and temporally varying recharge, the estimated transverse dispersivity coefficients were estimated to be significantly less than that reported in the literature for the more traditional approach that uses steady-state flow with averaged, less physically based recharge values. In the end, based on the Latin Hypercube sampling, a methodology for comprehensive uncertainty analysis, which accounts for multiple parameter sets and the associated correlations, was developed and applied to the case study.

Yong Yin (2009). Uncertainty Analysis and the Identification of the Contaminant Transport and Source Parameters for a Computationally Intensive Groundwater Simulation. UWSpace. http://hdl.handle.net/10012/4415