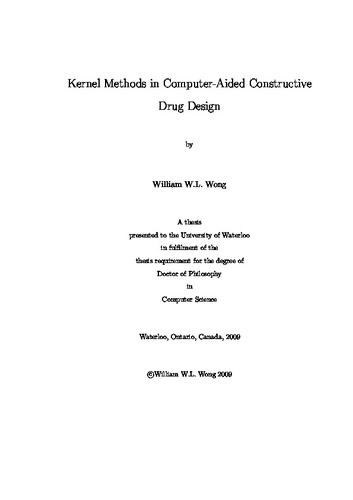 A drug is typically a small molecule that interacts with the binding site of some target protein. Drug design involves the optimization of this interaction so that the drug effectively binds with the target protein while not binding with other proteins (an event that could produce dangerous side effects). Computational drug design involves the geometric modeling of drug molecules, with the goal of generating similar molecules that will be more effective drug candidates. It is necessary that algorithms incorporate strategies to measure molecular similarity by comparing molecular descriptors that may involve dozens to hundreds of attributes. We use kernel-based methods to define these measures of similarity. Kernels are general functions that can be used to formulate similarity comparisons. The overall goal of this thesis is to develop effective and efficient computational methods that are reliant on transparent mathematical descriptors of molecules with applications to affinity prediction, detection of multiple binding modes, and generation of new drug leads. While in this thesis we derive computational strategies for the discovery of new drug leads, our approach differs from the traditional ligandbased approach. We have developed novel procedures to calculate inverse mappings and subsequently recover the structure of a potential drug lead. The contributions of this thesis are the following: 1. We propose a vector space model molecular descriptor (VSMMD) based on a vector space model that is suitable for kernel studies in QSAR modeling. Our experiments have provided convincing comparative empirical evidence that our descriptor formulation in conjunction with kernel based regression algorithms can provide sufficient discrimination to predict various biological activities of a molecule with reasonable accuracy. 2. We present a new component selection algorithm KACS (Kernel Alignment Component Selection) based on kernel alignment for a QSAR study. Kernel alignment has been developed as a measure of similarity between two kernel functions. In our algorithm, we refine kernel alignment as an evaluation tool, using recursive component elimination to eventually select the most important components for classification. We have demonstrated empirically and proven theoretically that our algorithm works well for finding the most important components in different QSAR data sets. 3. We extend the VSMMD in conjunction with a kernel based clustering algorithm to the prediction of multiple binding modes, a challenging area of research that has been previously studied by means of time consuming docking simulations. The results reported in this study provide strong empirical evidence that our strategy has enough resolving power to distinguish multiple binding modes through the use of a standard k-means algorithm. 4. We develop a set of reverse engineering strategies for QSAR modeling based on our VSMMD. These strategies include: (a) The use of a kernel feature space algorithm to design or modify descriptor image points in a feature space. (b) The deployment of a pre-image algorithm to map the newly defined descriptor image points in the feature space back to the input space of the descriptors. (c) The design of a probabilistic strategy to convert new descriptors to meaningful chemical graph templates. The most important aspect of these contributions is the presentation of strategies that actually generate the structure of a new drug candidate. While the training set is still used to generate a new image point in the feature space, the reverse engineering strategies just described allows us to develop a new drug candidate that is independent of issues related to probability distribution constraints placed on test set molecules.