Application of Different Measures of Bioavailability at Contaminated Sites 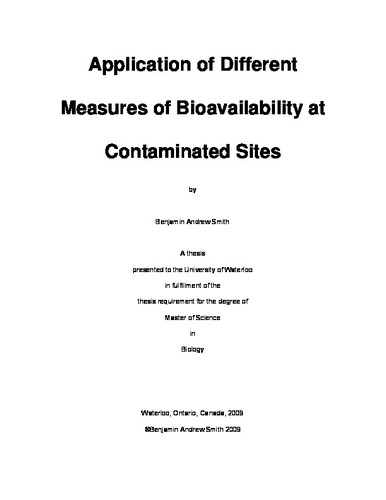 Contaminated areas resulting from anthropogenic activities have, for the most part, concentrations of contaminants that exceed Tier 1 standards below which the risk is considered acceptable. However, contaminants that have been in soil for a prolonged period can become recalcitrant over time, due to various physico-chemical and biological processes. Sequestered and recalcitrant contaminants are not readily biologically available to living organisms. However, they are easily measured analytically because of the strong acid extractions that are used in the analytical methodologies. Because toxicity is a function of exposure concentration(s), exposure duration, and bioavailability, contaminants in soil can be present at concentrations that exceed established standards but they represent minimal risk to ecological receptors because the contaminants are not fully available. To predict toxicity and estimate risk, it is imperative that an accurate and reliable measure of bioavailability be available. Several surrogate measures of bioavailability were compared to the results of a battery of toxicity tests using Cu, Pb, and Zn-contaminated soils collected from a former industrial area and Cu and Zn-contaminated soils collected from a former mining site. CaCl₂extractions, hydroxypropyl-β-cyclodextrin (cyclodextrin) extractions, Simulated Earthworm Gut (SEG) tests, and bioaccumulation tests were performed using the soils. Overall, SEG-extractable Cu was most predictive of adverse effects in industrial soils, likely due to enzymatic activity and/or increased ionic strength of the solution. For the mining soils, all chemical measures of bioavailability correlated with several biological responses; however, CaCl₂-extractable Cu and SEG-extractable Cu and Zn best predicted earthworm responses. Total Cu concentrations in soil correlated best with adverse effects to plants. No method was a good predictor of all biological effects for a single organism when data from the two sites were combined. The SEG test may provide a good indication of metal toxicity at contaminated sites with varying soil physico-chemical characteristics but further validation is required.