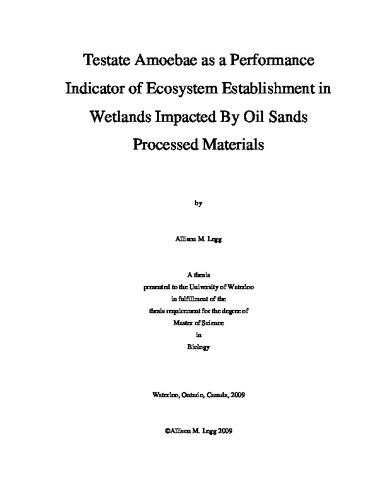 Mining for oil sands in the Athabasca Basin in northeastern Alberta is rapidly expanding. As economics continue to drive growing mining practices, waste management, reclamation and bio-monitoring strategies are becoming increasingly important. This project aims to determine the practicality of testate amoebae assemblages as an indicator of microbial community health and ecosystem establishment in wetlands impacted by oil sand processed materials (OSPM). Testate amoebae are unicellular, shelled protists that live in abundance in soils, leaf litter and in fresh water habitats. This group of protists forms shells (or tests) which makes them relatively easy to identify. Ecological studies have shown they occupy specific niches controlled by environmental parameters such as pH and moisture variables. These features make testate amoebae excellent bioindicators, and this project explores the potential of applying testate amoebae bioindicators in wetlands affected by OSPM. Using compound and epifluorescent microscopy techniques, testate amoebae species assemblages were identified and tabulated from a series of wetlands with different impacts by oil sands processed materials. Bacterial and fungal proportions were characterized to compare with the testate amoebae and identify possible links within the microbial community. A total of 44 species of testate amoebae were encountered in 24 wetlands, with Centropyxis platystoma and Centropyxis aculeata being the most common taxa. Natural peatland sites, not affected by OSPM contained the most diverse assemblage of testate amoebae containing Arcella, Assulina, Centropyxis, Englypha, and Heleopera. Open-water wetlands not impacted by OSPM were less diverse than peatland sites, but maintained between two and 12 taxa per site. Open-water sites amended with OSPM contained fewer taxa (between 0 and 4 taxa at any given site) and fewer individuals than any other site type, with Difflugia being most common. Bacteria contributed an average of 65% of the microbial community in open-water sites and an average of 80% in peatland sites. Peatland sites were significantly different (P<0.05) from all other site types in terms of testate amoebae, bacteria, and fungal biomass. This study demonstrated that differences exist in testate amoebae assemblages between site types do exist, this study establishes the fact that testate amoebae are too few (<1% of biomass), and not in sync with the other microbial facets studied (bacteria and fungi) limiting their use as bioindicators of microbial community establishment in wetlands impacted by oil sands processed materials. However the predominance of bacteria in all site types calls attention to their vital role in these sites and their importance in further research in oil sands reclamation.