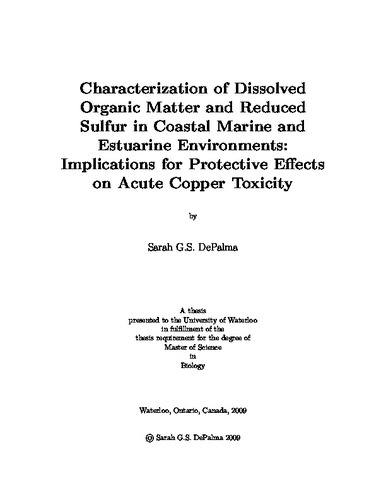 Copper-induced toxicity in aqueous systems depends on its speciation and bioavailability. Dissolved organic matter (DOM) and reduced sulfur species can complex copper, influencing speciation and decreasing bioavailability. DOM composition in estuaries can vary, depending on allochthonous, autochthonous, or wastewater source. At a molecular level, variability in DOM quality potentially results in different copper binding affinities. The aim of this study was to characterize and quantify DOM and reduced sulfur in estuaries and investigate possible correlations between these parameters and the capacity to complex copper, reducing its toxicity. This study will have implications on the development of marine-specific toxicity prediction models. DOM was characterized in seventy-one estuarine samples through DOC concentration and fluorescence measurements, combined with spectral resolution techniques, to quantify humic-, fulvic-, tryptophan-, and tyrosine-like fractions. Reduced sulfur was measured by the chromium-reducible sulfide (CRS) technique. Acute copper toxicity tests were done on a subset of samples expressing extreme DOC, fluorescent allochthonous, autochthonous, and CRS concentrations. The results showed significant differences in DOM quality, independent of DOC concentration. In terms of total fluorescent material, humic-like material ranged from 9.48% to 66.1%, followed by fulvic-like with a range of 14.5% to 63.2%, and 0.00% to 36.5% for tryptophan-like and 0.64% to 25.2% for tyrosine-like material. CRS was widely variable among the samples; concentrations ranging from 0.5 nM to 7800 nM. The toxicity results suggested DOC was a very good predictive measure of copper EC50 in estuaries (r2 = 0.84) independent of DOM quality. Furthermore, CRS was saturated at low copper concentrations indicating strong binding sites for copper, suggesting that while CRS is protective, it does not bind copper at toxicologically relevant concentrations and therefore is not a good predictive measure of copper toxicity.