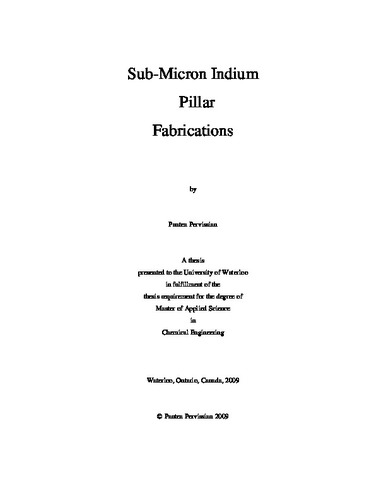 The laws of classical mechanics show that mechanical properties are independent of sample sizes. However, based on extensive theoretical work and experimentation, it is believed that reducing the size of materials to the submicron scale can result in different mechanical properties than those found in bulk quantities. This size effect was explained by the strain gradient. Atomic simulations have shown that yield stress depends on size even in the absence of the strain gradient. All of the experiments done on material creep behaviour, reported in the literature, have been conducted in the presence of strain gradient. This thesis focuses on the fabrication methods of freestanding indium pillar samples created by two unique methods; focused ion beam (FIB) and the micro-fabrication approach. The low melting point indium metal limits the application of FIB to form the sub-micron pillars. As a result, two different micro-lithography techniques, ultra-violet radiation and electron-beam lithography, were developed to fabricate these nano-pillars. In order to monitor the creep mechanism, which was dominant in this testing, the samples were then divided into two groups: polycrystalline and single-crystal pillars, each in different sizes. These pillars will later be compressed by a nano-indenter using a flat punch. Compressive stress, strain, and stiffness of the pillars will be measured to verify if the indium mechanical behavior deviates from the bulk in the absence of strong strain gradient.