Photoinduced Toxicity of Metals and PAHs to Hyalella azteca: UV-Mediated Toxicity and the Effects of Their Photoproducts 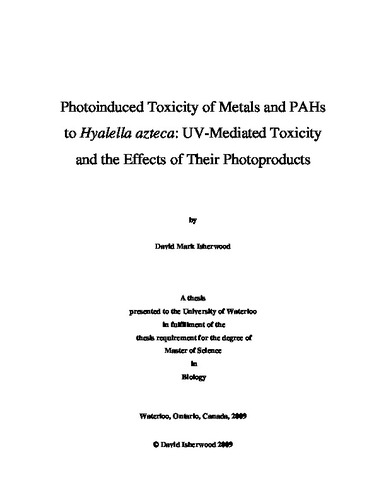 Polycyclic aromatic hydrocarbons (PAH) are a class of common environmental contaminants known to be phototoxic. PAH Photoinduced toxicity is caused by two mechanisms: photomodification and photosensitization. The photomodification process results in modified PAHs, usually via oxygenation, forming new compounds (oxyPAHs), which are often more soluble than their parent PAHs. The process of photosensitization usually leads to the production of singlet oxygen, a reactive oxygen species (ROS), which in turn is extremely damaging to organic molecules. Both of these processes occur at environmentally relevant levels of actinic radiation. Metals are ubiquitous environmental contaminants found extensively in many aquatic systems. Many metals are toxic at very low levels, and exhibit toxicity via ROS production or via direct binding to a ligand in an organism (Biotic Ligand Model). PAHs and metals often occur as co-contaminants in the environment, and there combined effects have only been examined in a few organisms. The goal of this thesis was to examine the toxicity of PAHs, oxyPAHs, metals and their mixtures to Hyalella azteca in 96 h acute toxicity tests. All of the tests were performed under varying spectra of light; photosynthetically active radiation (PAR), PAR + UVA or simulated solar radiation (SSR) (PAR + UVA radiation + UVB radiation). In addition, chemical exposures in the Dark were performed to assess toxicity in the absence of light. The PAHs chosen represent 3 of the most common PAHs anthracene (ANT), phenanthrene (PHE), benzo(a)anthracene (BAA). The 12 oxyPAHs studied were quinolated analogues of the 3 parent compounds as well as anthraquinone derivatives that are hydroxylated at various positions. The toxicity of the parent PAHs increased in the presence of increasing amounts of actinic radiation. The toxicity of the oxyPAHs also increased as PAR, UVA and UVB was added. Furthermore, most PAHs and oxyPAHs were found to be more toxic than the parent PAHs in the absence of actinic radiation. The metals cadmium (Cd), copper (Cu), nickel (Ni) and zinc (Zn) were used in toxicity tests. These metals were selected based on their high prevalence in aquatic environments and the large amount of data in the published work. The order of metal toxicity in the Dark was Cd > Cu > Zn > Ni. The order of metal toxicity for the PAR and PAR/UV-A regime was Cd = Cu > Ni > Zn. The order of metal toxicity for the SSR treatment was Cu > Cd > Ni > Zn. The toxicity of several metal/PAH mixtures was determined using one of the four metals and ANT, ATQ and 1-hATQ. The mixtures generally had additive toxicity under Dark and PAR lighting regimes. Under SSR lighting most mixtures showed a strictly additive toxicity, however synergistic toxicity was observed for the redox active metals (Cu, Ni) mixed with ANT. In the aquatic environment complex mixtures of PAHs and metals occur. The results of this study illustrate the effects that these mixtures may have on benthic invertebrates.

David Isherwood (2009). Photoinduced Toxicity of Metals and PAHs to Hyalella azteca: UV-Mediated Toxicity and the Effects of Their Photoproducts. UWSpace. http://hdl.handle.net/10012/4396