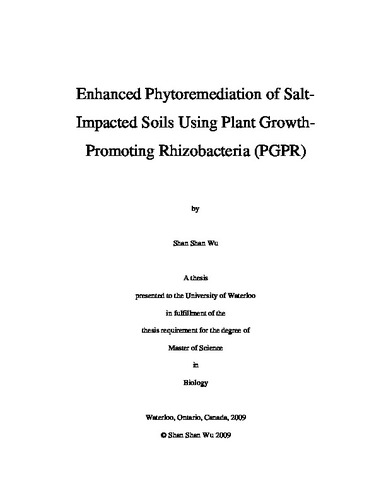 Soil salinity is a widespread problem that limits crop yield throughout the world. The accumulation of soluble salts in the soil can inhibit plant growth by increasing the osmotic potential of interstitial water, inducing ion toxicity and nutrient imbalances in plants. Over the last decade, considerable effort has been put into developing economical and effective methods to reclaim these damaged soils. Phytoremediation is a technique that uses plants to extract, contain, immobilize and degrade contaminants in soil. The most common process for salt bioremediation is phytoextraction which uses plants to accumulate salt in the shoots, which is then removed by harvesting the foliage. As developing significant plant biomass in saline soils is an issue, a group of free-living rhizobacteria, called plant growth promoting rhizobacteria (PGPR), can be applied to plant seeds to aid plant growth by alleviating salt stress. The principle objective of this research was to test the efficacy of PGPR in improving the growth of plants on salt-impacted soils through greenhouse and field studies. In this research, previously isolated PGPR strains of Pseudomonas putida. UW3, Pseudomonas putida UW4, and Pseudomonas corrugata CMH3 were applied to barley (Hordeum valgare C.V. AC ranger), oats (Avena sativa C.V. CDC baler), tall wheatgrass (Agropyron elongatum), and tall fescue (festuca arundinacea C.V. Inferno). PGPR effects on plant growth, membrane stability, and photosynthetic activity under salt stress were examined. Greenhouse studies showed that plants treated with PGPR resulted in an increase in plant biomass by up to 500% in salt-impacted soils. Electrolyte leakage assay showed that plants treated with PGPR resulted in 50% less electrolyte leakage from membranes. Several chlorophyll a fluorescence parameters, Fv/Fm, effective quantum yield, Fs, qP, and qN obtained from pulse amplitude modulation (PAM) fluorometry showed that PGPR-treated plants resulted in improvement in photosynthesis under salt stress. Field studies showed that PGPR promoted shoot dry biomass production by 27% to 230%. The NaCl accumulation in plant shoots increased by 7% to 98% with PGPR treatment. The averaged soil salinity level at the CMS and CMN site decreased by 20% and 60%, respectively, during the 2008 field season. However, there was no evidence of a decrease in soil salinity at the AL site. Based on the improvements of plant biomass production and NaCl uptake by PGPR observed in the 2008 field studies, the phytoremediation efficiency on salt-impacted sites is expected to increase by 30-60% with PGPR treatments. Based on the average data of 2007 and 2008 field season, the time required to remove 25% of NaCl of the top 50 cm soil at the CMS, CMN and AL site is estimated to be six, twelve, and sixteen years, respectively, with PGPR treatments. The remediation efficiency is expected to accelerate during the remediation process as the soil properties and soil salinity levels improve over time.