The Global Fight Against HIV/AIDS: Has the United Nations Successfully Securitized HIV/AIDS? 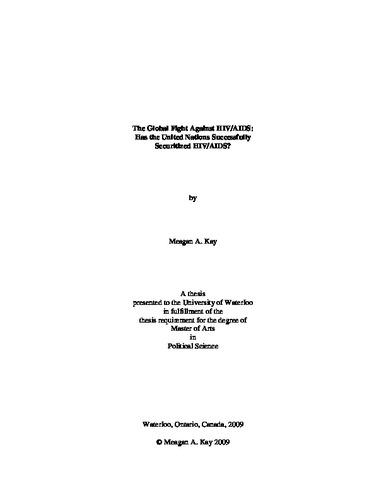 HIV/AIDS is an urgent health issue in many areas of the world, particularly in Africa. In addition to reaching pandemic status, HIV/AIDS is also being elevated to the level of a security threat. While this is occurring both nationally and internationally, the United Nations is leading this securitization attempt. The UN has been able to engage in this attempt as it is the most influential international organization and the leading norm promoting organization. Securitization is an analytic process that traces how issues become identified and understood as security threats. This concept originated within the Copenhagen school of security studies, and this is the framework that this paper relies on to analyze the connection between HIV/AIDS and security. The connection between HIV/AIDS and security is now widely internalized, accepted and even promoted by national governments, international organizations, and non-governmental organizations. However, the successful securitization of HIV/AIDS has yet to be fully explored, understood, or tested. This paper undertakes this task, and relies on the Copenhagen process of securitization to trace the security discourse initiated from the UN, down through four selected case studies. It identifies which of the key Copenhagen requirements for securitization have been met, and which have not been met, ultimately leading to the conclusion that the United Nations prompted a successful internal securitization and an unsuccessful external securitization. This paper concludes that the current Copenhagen school process of securitization is flawed and is inadequate for studying today’s emerging non-traditional threats. In particular, it is unable to trace the securitization of HIV/AIDS as a result of stringent and unrepresentative criterions. It attempts to move forward by offering a rationale and direction to begin updating the Copenhagen process of securitization.