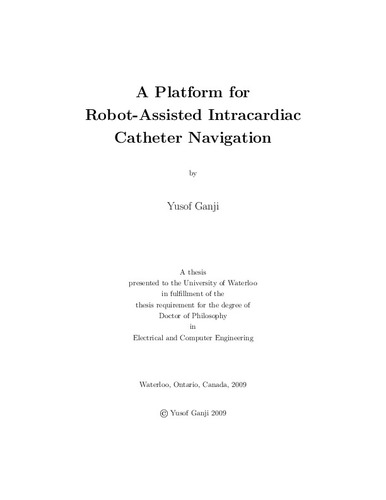 Steerable catheters are routinely deployed in the treatment of cardiac arrhythmias. During invasive electrophysiology studies, the catheter handle is manipulated by an interventionalist to guide the catheter's distal section toward endocardium for pacing and ablation. Catheter manipulation requires dexterity and experience, and exposes the interventionalist to ionizing radiation. Through the course of this research, a platform was developed to assist and enhance the navigation of the catheter inside the cardiac chambers. This robotic platform replaces the interventionalist's hand in catheter manipulation and provides the option to force the catheter tip in arbitrary directions using a 3D input device or to automatically navigate the catheter to desired positions within a cardiac chamber by commanding the software to do so. To accomplish catheter navigation, the catheter was modeled as a continuum manipulator, and utilizing robot kinematics, catheter tip position control was designed and implemented. An electromagnetic tracking system was utilized to measure the position and orientation of two key points in catheter model, for position feedback to the control system. A software platform was developed to implement the navigation and control strategies and to interface with the robot, the 3D input device and the tracking system. The catheter modeling was validated through in-vitro experiments with a static phantom, and in-vivo experiments on three live swines. The feasibility of automatic navigation was also veri ed by navigating to three landmarks in the beating heart of swine subjects, and comparing their performance with that of an experienced interventionalist using quasi biplane fluoroscopy. The platform realizes automatic, assisted, and motorized navigation under the interventionalist's control, thus reducing the dependence of successful navigation on the dexterity and manipulation skills of the interventionalist, and providing a means to reduce the exposure to X-ray radiation. Upon further development, the platform could be adopted for human deployment.