The Efficacy of the DNA Barcoding Proctol in determining species in the red algal orders Batrachospermales and Thoreales and a comparison with the plastid rbcL gene. 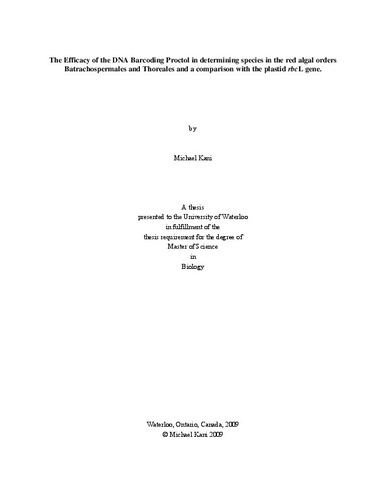 The red algae (Rhodophyta) is a monophyletic phylum and is comprised of seven classes including the Florideophyceae. The class monophyletic Florideophyceae is postulated to have diverged from the class Bangiophyceae and contains over 32 orders including the freshwater Batrachospermales and Thoreales. Classifications within these orders as well as the class are based predominantly on female reproductive characters and vegetative morphology. The order Batrachospermales contains a number of families and genera with the genus Batrachospermum being the largest with eight recognized sections. The order Thoreales was once considered a genus within the order Batrachospermales but is currently recognized as an autonomous order. Due to the cryptic nature of the genera, particularly Batrachospermum, the Morphological Species Concept has proven to be limiting in the classification at the species level. This study examines the usefulness of the mitochondrial gene encoding cytochrome c oxidase subunit I (COI) in delimiting species within the orders Batrachospermales and Thoreales from several countries spanning three continents and comparing this data to a parallel analysis of the gene encoding the large subunit of the chloroplast enzyme Ribulose 1, 5-bisphosphate carboxylase/oxygenase (rbcL). Sequence data and phylogenetic analysis illustrates possible delineation among species using the COI marker. Distinct clades of sections Batrachospermum, Setacea, Virescentia, Turfosa, Contorta, Gonimopropagulum and Aristata were observed from various geographic locations; as well as clades of genus Sirodotia, Tuomeya Lemanea, Paralemanea and Thorea. The present study proposes the elevation of the current recognized infrageneric sections to the status of genus based on both COI and rbcL genes sequence data. In addition, very few clades appeared to reflect any biogeographic trends.

Michael Kani (2009). The Efficacy of the DNA Barcoding Proctol in determining species in the red algal orders Batrachospermales and Thoreales and a comparison with the plastid rbcL gene.. UWSpace. http://hdl.handle.net/10012/4384