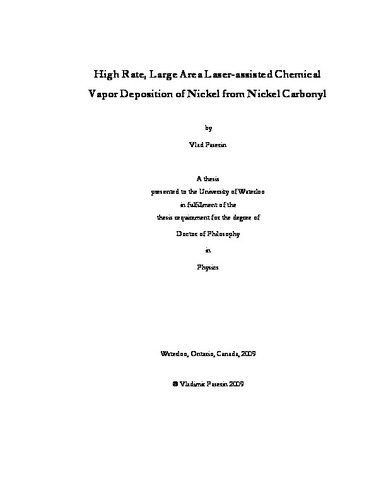 High-power diode lasers (HPDL) are being increasingly used in industrial applications. Deposition of nickel from nickel carbonyl (Ni(CO)4) precursor by laser-induced chemical vapor deposition (CVD) was studied with emphasis on achieving high deposition rates. An HPDL system was used to provide a novel energy source facilitating a simple and compact design of the energy delivery system. Nickel deposits on complex, 3-dimensional polyurethane foam substrates were prepared and characterized. The resulting “nickel foam” represents a novel material of high porosity (>95% by volume) finding uses, among others, in the production of rechargeable battery and fuel cell electrodes and as a specialty high-temperature filtration medium. Deposition rates up to ~19 µm/min were achieved by optimizing the gas precursor flow pattern and energy delivery to the substrate surface using a 480W diode laser. Factors affecting the transition from purely heterogeneous decomposition to a combined hetero- and homogeneous decomposition of nickel carbonyl were studied. High quality, uniform 3-D deposits produced at a rate more than ten times higher than in commercial processes were obtained by careful balance of mass transport (gas flow) and energy delivery (laser power). Cross-flow of the gases through the porous substrate was found to be essential in facilitating mass transport and for obtaining uniform deposits at high rates. When controlling the process in a transient regime (near the onset of homogenous decomposition), unique morphology features formed as part of the deposits, including textured surface with pyramid-shape crystallites, spherical and non-spherical particles and filaments. Operating the laser in a pulsed mode produced smooth, nano-crystalline deposits with sub-100 nm grains. The effect of H2S, a commonly used additive in nickel carbonyl CVD, was studied using both polyurethane and nickel foam substrates. H2S was shown to improve the substrate coverage and deposit uniformity in tests with polyurethane substrate, however, it was found to have no effect in improving the overall deposition rate compared to H2S-free deposition process. Deposition on other selected substrates, such as ultra-fine polymer foam, carbon nanofoam and multi-wall carbon nanotubes, was demonstrated. The HPDL system shows good promise for large-scale industrial application as the cost of HPDL energy continues to decrease.