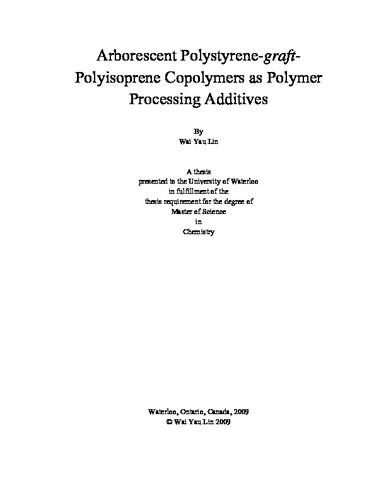 Some commodity polymers such as linear low density polyethylene (LLDPE) suffer from melt defects including sharkskin, cyclic melt fracture, and gross melt fracture during processing. The occurrence of these defects sets an upper limit to the rate at which these polymers can be processed, thus increasing production costs. One method to eliminate or delay the formation of melt defects is through the addition of polymer processing additives (PPA). These PPA migrate to the surface of the polymer melt and form a layer inducing slippage on the metallic surfaces of processing equipment such as extruder screws and extrusion dies. This reduces energy consumption and increases processing throughput. Effective PPA are generally phase-separated from the host polymer and migrate to the die wall. Arborescent polymers (AP) are a class of dendritic branched polymers with characteristics, including a compact structure and a rigid sphere-like topology, making them potentially useful as PPA. A series of linear polyisoprene (PIP) and arborescent polystyrene-graft-polyisoprene copolymer samples was synthesized for the current investigation. The branched copolymers were derived from polystyrene (PS) substrates of different architectures (linear and branched), functionalized with acetyl or chloromethyl groups, and coupled with PIP macroanions. The copolymers thus obtained were modified by hydrosilylation with a perfluorohydrosilane (PHS), namely (tridecafluoro-1,1,2,2-tetrahydrooctyl)dimethylsilane,on 17 to 50 % of the isoprene units. The linear PIP samples were also modified by hydrosilylation for comparison. The additives were blended with LLDPE at concentrations of 0.1 %w/w and 0.5 %w/w to evaluate their performance as PPA by extrusion at different shear (deformation) rates. A coadditive [poly(ethylene glycol), Mw ≈ 4,000, PEG4K] was also blended with three of the PPA samples for comparison. Furthermore, the size of the PPA droplets within the LLDPE matrix was monitored by optical microscopy. All the samples led to some degree of improvement in the extrusion of LLDPE, but the lower molecular weight PPA appeared to perform better than those with a high molecular weight. Interestingly, several PPA samples caused the early onset of CMF but glossy, defect free surfaces were obtained at higher shear rates. This suggests that a minimum shear rate is required for these additives to coat the extrusion die. The incorporation of coadditive improved the performance of the PPA at 0.5 %w/w PPA concentration, but little or no effect was observed at 0.1 %w/w. The size of the PPA droplets dispersed in LLDPE ranged from 1.0-1.5 μm, increasing to 1.4-2.1 μm with the coadditive.