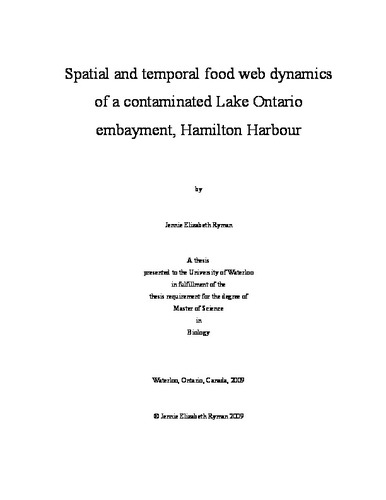 Hamilton Harbour, a semi-enclosed bay located at the western end of Lake Ontario, is listed as one of the most polluted systems in the Great Lakes. Anthropogenic influences such as four wastewater treatment plants, two steel mills and shoreline development have lead to degradation of this system. A Remedial Action Plan is in place to clean up the harbour by 2015. This study examined the food web dynamics of Hamilton Harbour including 21 species of fish, benthic invertebrates, plankton and macrophytes. Using carbon and nitrogen stable isotopes spatial and seasonal variability throughout the harbour was examined. Zooplankton and phytoplankton collected at three different sites in the harbour showed no significant difference spatially but did show seasonal trends, reaching the highest nitrogen values in early summer. Benthic invertebrates, when observed in δ13C: δ15N biplots, group together by sampling site in each season. Seasonally benthic invertebrates acquire higher nitrogen signatures in summer then decrease in fall at all sites. The fish community in the harbour do not have spatially distinct isotope signatures. Seasonally nitrogen signatures increased at all sites while carbon signatures remained between -25 ‰ and -26 ‰. Overall the plankton and benthic invertebrate nitrogen isotope signatures are higher than the fishes. This indicates that there is a recent change in nutrient source. The likely candidate for nutrient input is an anthropogenic source, such as the wastewater treatment plants discharging into the harbour. Isotope signatures show large variation in fish species collected indicating that the fishes are omnivore generalists that take advantage of available food sources throughout the harbour. Further remediation work, such as habitat modifications, can now be tailored towards generalist omnivores that move throughout the harbour.