A Russian Way of War? Westernization of Russian Military Thought, 1757-1800 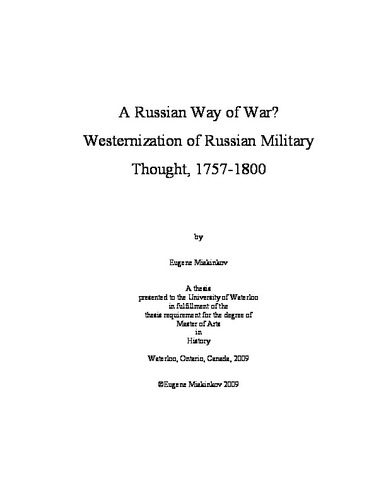 The present study constitutes one of the first attempts to establish the extent to which Russian military thought became westernized by the end of the eighteenth century. The task is an important one in light of Soviet and Russian scholarship that maintains that Russia developed a unique, different, and, some argue, superior way of war to the West. This work argues that Russian military thought was greatly influenced by the ‘military enlightenment’ of Europe, and that the ideas proposed by Russia’s foremost military theoreticians were not as novel as previously claimed. Therefore, the final intellectual product was more a continuation of, rather than a break with, Western practices and traditions of warfare. In this respect, the underlying theme of this thesis clashes with traditional Russian national military historical scholarship. The second major theme of this study is to challenge the pervasive but flawed and often simplified interpretation of the Russian army and its soldiers as undisciplined and uneducated barbarians. Contrary to these misleading views, the writings of Russian theorists bring to light the concerns about discipline and education for the officers, personal hygiene and hospital care for the soldiers and Russian awareness of complex strategic theoretical issues. The humanitarianism and sophistication of early-modern Russian military thought thus becomes abundantly clear. The scope of this work is inescapably restrictive, and the period that it examines, roughly from 1757 to 1800, has been consciously chosen to reflect the ideas of Russia’s two most important and influential military statesmen: Peter Rumyantsev and Alexander Suvorov.