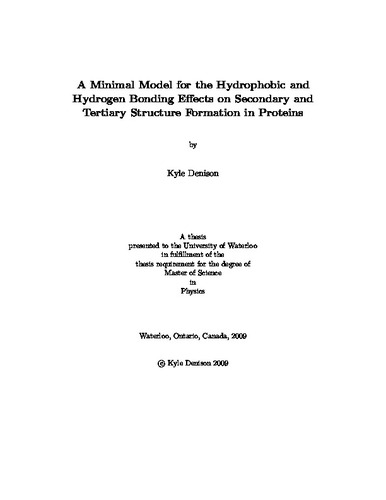 A refinement of a minimal model for protein folding originally proposed by Imamura is presented. The representation of the alpha-helix has been improved by adding in explicit modelling of the entire peptide unit. A four-helix bundle consisting of four alpha-helices and three loop regions is generated with the parallel tempering Monte Carlo scheme. Six native states are found for the given sequence, four U-bundle and two Z-bundle states. All six states have energies of E approx -218ε and all appear equally likely to occur in simulation. The highest probability of folding a native state is found to be at a hydrophobic strength of Ch = 0.8 which agrees with the value of Ch = 0.7 used by Imamura in his studies of alpha to beta structural conversions. Two folding stages are observed in the temperature spectrum dependent on the magnitude of the hydrophobic strength parameter. The two stages observed as temperature decreases are 1) the hydrophobic energy causes the random coil to collapse into a compact globule 2) the secondary structure starts forming below a temperature of about T = 0.52ε/kB. The temperature of the first stage, which corresponds to the characteristic collapse temperature Tθ, is highly dependent on the hydrophobic strength. The temperature of the second stage is constant with respect to hydrophobic strength. Attempts to measure the characteristic folding temperature, Tf , from the structural overlap function proved to be difficult due mostly to the presence of six minima and the complications that arose in the parallel tempering Monte Carlo scheme. However, a rough estimate of Tf is obtained at each hydrophobic strength from a native state density analysis. Tf is found to be significantly lower than Tθ.

Kyle Robert Denison (2009). A Minimal Model for the Hydrophobic and Hydrogen Bonding Effects on Secondary and Tertiary Structure Formation in Proteins. UWSpace. http://hdl.handle.net/10012/4370