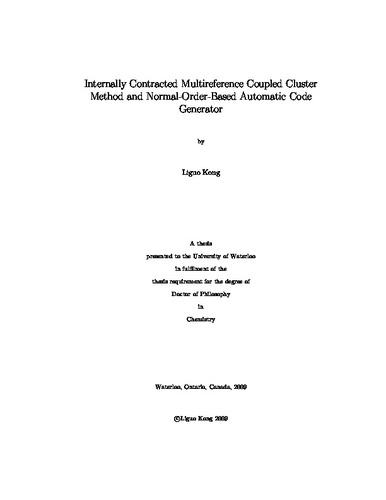 Single reference coupled cluster theory has been established as the method of choice for calculating electronic properties of small-to-medium size molecules. However, in typical multireference cases, such as bond breaking processes, biradicals, excited states, very high order excitations may be needed in the cluster operator to obtain reliable and accurate results, which is not practical due to the rapidly growing computational costs. Although there has been much e®ort to extend the applicability of single reference methods, there is little doubt that genuine multireference methods are indispensable. The method we are developing, the State Speci¯c Equation of Motion Coupled Cluster (SS-EOMCC) method, generalizes the state universal Equation of Motion Coupled Cluster (EOMCC)methods to a state specific version. SS-EOMCC works for both ground states and excited states. It is rigorously spin-adapted. The cluster operator amplitudes are solved, taking the complete- active-space self-consistent-¯eld function as the reference function. The differential relaxation effects are taken into account by diagonalizing the transformed Hamiltonian in the multireference configuration interaction singles (MRCIS) space. To implement the method, we developed an automatic program generator, the details of which are presented. The strategy used in approximating residual equations in SS-EOMCC is based on a novel normal order theory, which is a generalization of traditional particle-hole formalism based normal order theory. We discuss normal order theory in a general context, start with the version developed by Mukherjee and Kutzelnigg, and we furnish an algebraic proof for the corresponding contraction rules. Then we proceed to show how our normal order theory works. Finally we present the benchmark results to gauge the SS-EOMCC method. We calculate the triplet state state of F₂ to examine the behavior of the method for single reference systems, and study the singlet states of H₂O, CO and N₂ to test its performance for multireference systems. In addition, we illustrate the e®ect of a perturbative correction, which attempts to alleviate the redundancy issue. We also apply the method to study the energetics of end-on and side-on peroxide coordination in ligated Cu₂O₂ models, where SS-EOMCC[+2] employing a small active space achieves quite accurate results. The final diagonalization of the transformed Hamiltonian in the MRCIS space is expensive and limits the applicability of the method. We attempt to develop a cheaper internally contracted multireference coupled cluster method by introducing semi-internal excitation operators in the cluster operator such that the final diagonalization can be confined within the active space, but the results are not satisfactory yet. The Jeziorski-Monkhorst (JM) ansatz has been studied extensively, and different ways to resolve the redundancy issue have been explored. We analyze these JM-ansatz based methods, derive them in a simple way to disclose their connections transparently, and point out some problem in these methods. Another issue of general interest which is examined in the thesis is orbital invariance. For single reference methods the invariance property is usually clear, but this is not always the case for multireference methods. We analyze this problem from the tensor theory point of view, and propose a practical self-consistency-checking algorithm to determine whether a method is orbital invariant or not. We apply the algorithm to different methods, in particular, demonstrating the lack of the invariance property for JM-ansatz based methods.