A Portrait of Porta Portese 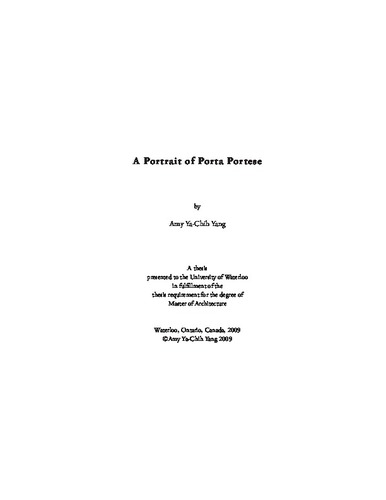 This thesis investigates an informally self-organized street market, Porta Portese, in Rome, Italy. As a response to the contemporary phenomenon of migration, of people and goods, Porta Portese reflects the city’s evolving urban, cultural and social dynamics under the impact of global forces. Based on fieldwork executed from 2007-2009, this thesis builds on the idea of scoring in an attempt to establish a framework of tangible notations, using mediums ranging from time-lapse photography to pattern mapping. The language of architecture is adapted to render visible the spatial dynamics in the fabrication of the market. Despite its lack of representation, Porta Portese leaves its mark as a layer of the invisible city of Rome. One can trace its terrain through palpable memories of a collective urban and cultural experience, for it transports ideas, images and values between different worlds based on universal understandings. Ultimately, this thesis advocates for an interpretive representation of places like Porta Portese as valuable urban spaces that celebrate and satisfy the needs of direct human experience. This is achieved through enabling the neglected voice of a place that can strike a resonating chord of dialogue amongst differences - and it all begins from a story about Porta Portese.