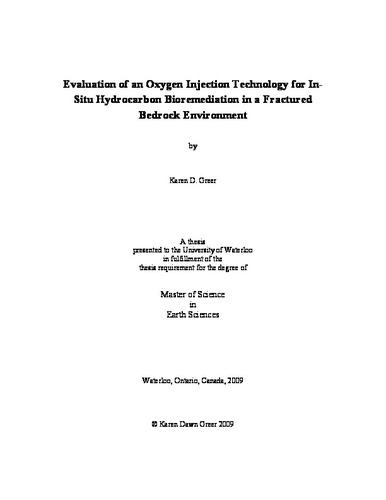 Oxygen has been shown to be an effective addition of enhancing the bioremediation of petroleum hydrocarbon contamination in porous media; however, the ability to effectively deliver oxygen to petroleum hydrocarbon contaminated groundwater has proven difficult. A field and numerical modelling study was completed at a former gas station in southern Ontario, to assess the delivery of oxygen into groundwater in a fractured limestone aquifer that had been contaminated with petroleum hydrocarbons. A field investigation was completed to characterize the bedrock aquifer and the groundwater flow system. Several hydraulically active fracture zones were identified and characterized. To evaluate how dissolved oxygen would behave in this type of groundwater environment, an injection test was completed using iTi’s gPro® oxygen injection technology. About 1000 L of water containing dissolved oxygen at ~ 30 mg/L and a bromide tracer was injected over ~ 90 minutes and monitored for ~ 10 days in the injection well and in a multilevel monitoring well located 3 metres down-gradient. The oxygen concentration rose rapidly within the injection well and at two of the down-gradient monitor intervals which were aligned with the injection well via major fractures. Concentration tailing persisted in the injection well for several days following injection. The effects of biodegradation were not assessed as part of this investigation. A three-dimensional numerical model for groundwater flow and advective-dispersive transport within a discretely-fractured porous medium was calibrated to the field conditions. The simulated injection test demonstrated that oxygen rapidly filled the porous matrix surrounding the injection well and filled the local intersecting fractures. Following injection, the oxygenated groundwater in the local fractures was rapidly flushed by the natural groundwater flow, with oxygen arrivals appearing as sharp pulses in the fracture-associated breakthrough curves in the monitor well. Back diffusion of oxygen from the porous matrix into the injection well was accurately reproduced by the model. Media properties (fracture apertures, hydraulic gradient and hydraulic conductivity) were varied to assess the sensitivity of the model and to evaluate the effectiveness of the remediation technology under different conditions. The sensitivity runs demonstrated that the distribution of oxygen within the system could be significantly different with varying degrees of advective transport within the fractures and diffusion into the rock matrix which depends on the physical properties and hydrogeological conditions. Predictive simulations were then run with two different injection scenarios: a continuous injection for 1 week and a cyclic injection scenario (injection every 2 days). The same mass of oxygen was delivered in each simulation (~3 kg). The results demonstrated that the delivery of oxygen into the system (continuous or cyclic) could affect the advective transport of oxygen through the fractures and the diffusion of oxygen into the matrix. The continuous injection resulted in a maximum zone of influence (down-gradient and in the transverse direction) while maintaining high levels of oxygen within the matrix. On the other hand the cycle injection provided a more continuous supply of oxygen over time to the system. The zone of influence was reduced but diffusion into the matrix along the fractures increased, creating a more uniform zone of increased oxygen concentrations around the injection well and along the fractures. This study demonstrated that oxygen could effectively be delivered to a fractured bedrock system at levels potentially sufficient to enhance aerobic biodegradation. Additional areas requiring investigation include the behavior of oxygen during hydrocarbon biodegradation through field and modelling studies. Full scale implementation of the technology should then be considered to provide additional information with respect to the applicability of the technology to real world environments.