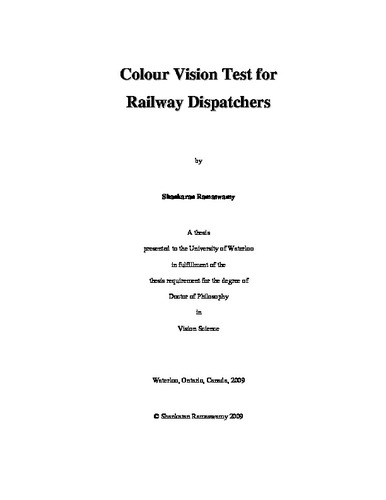 Introduction Colour codes are used extensively in railways to convey specific information governing movement of trains and equipment on the track. One such task is the railway traffic control display that uses colour coded video display terminals (VDTs) to convey information of the signal status, train movements and track status to the railway dispatcher. Because individuals with colour vision deficiencies (colour-defectives) may have problems with these colour-related tasks, questions were raised about the suitability of colour vision defectives to work as railway dispatchers. In order to answer that, a VDT based Dispatch Colour Vision Test based on the actual railway traffic display was developed previously. Purpose The main purpose of this thesis is to establish the pass/fail scores and repeatability of the VDT based Dispatch Colour Vision Test that resulted from the previous work. Secondly, the study will also examine whether clinical colour vision tests can predict the performance on the practical task. Methods The Dispatch colour vision test was divided into three parts based on the colour sets that the dispatcher had to recognize. The testing computer system used the the same RGB colour settings, graphics card and monitor as in railway dispatch centres. Subjects viewed the display colours and entered their responses by using a mouse. One hundred colour-normals and fifty two colour-defectives participated in the initial session. The test was repeated approximately after 10 days. Ninety three colour-normals (93%) and 44 (85%) colour-defectives participated in the second session. The total number of errors and time to complete the test was recorded. Results Pass/Fail on the VDT Dispatch colour vision test was based on colour-normal errors. Ignoring orange-red errors, two errors were allowed in the first session and one error was allowed in the second session. Based on this criterion, 42% of colour vision defectives could perform as well as colour normal subjects. The kappa coefficient of agreement between the sessions for the colour-defectives was 0.85. Detailed analysis between the colour differences and the errors showed only a weak correlation between the two. However, the general trend was that colour-defectives made more errors on colours that were near or along the same lines of confusions and the colours were nearly equal in luminance. Nevertheless, the interaction between luminance and location with respect to the lines of confusion was not easy to interpret. The time to complete the task for the colour-defectives who passed the test took 14% longer than colour-normals and colour-defectives who failed took 30% longer than colour-normals. All groups showed a similar learning effect with an 18% reduction in mean times to complete the task at the second session. There was no significant correlation between the number of errors and time to complete or the clinical tests and completion times for any of the groups. Clinical colour vision tests have limited value in predicting performance of colour-defectives on the Dispatch test. Logistic analysis results showed that the Farnsworth D-15 along with the Nagel was the best predictor of the VDT Dispatch colour test pass/fail results. However, these results were similar to using the Farnsworth D-15 test alone. Ninety-five percent of the individuals who failed the Farnsworth D-15 also failed the Dispatch test. However, approximately 25% of the individuals who passed the Farnsworth D-15 failed the VDT Dispatch colour test which is an unacceptable false negative rate. These results indicate the Farnsworth D-15 can only be used to predict who is likely to fail the dispatch test. Conclusions Forty two percent of colour vision defectives could perform as well as colour-normals in identifying VDT railway display colours and time to complete the task. Clinical colour vision tests were inadequate predictors of performance in practical task, overall. However, the Farnsworth D-15 was a very good predictor of who would fail the VDT Dispatch test. Hence a practical VDT Dispatch test may be needed to test individuals who would want to work as railway dispatchers.