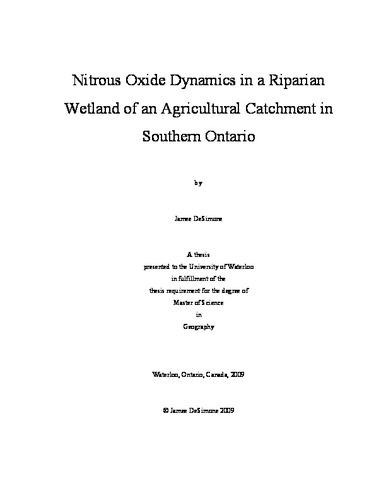 Riparian zones (RZ) are known to act as buffers, reducing the transfer of potentially harmful nutrients from agricultural fields to surface water bodies. However, many of the same processes in the subsurface that help to reduce this nutrient loading, may also be leading to greenhouse gas (GHG) production and emissions from these areas. Agricultural riparian zones in Southern Ontario are often characterized by a sloped topography, with the highest topographic position being closest to the field edge, decreasing towards an adjacent stream or other surface water body. This topographic variability, combined with lateral chemical inputs from both upland areas and the stream, is expected to cause variable hydrochemical environments throughout the RZ, which may therefore lead to variable N2O dynamics between upland, mid-riparian and lowland areas. The objectives of this study were to examine these spatial trends in N2O production and resulting emissions, as related to the hydrochemical environment in these three distinct zones. Objectives were achieved by instrumenting 6 sites across two transects running perpendicular from the agricultural field edge, towards the stream edge, analyzing for subsurface N2O, moisture and temperature, groundwater NO3, NH4, dissolved organic carbon (DOC), dissolved oxygen, and surface fluxes of N2O. Subsurface N2O concentrations and ground water nutrient concentrations displayed distinct spatial and temporal/seasonal trends in the three positions across the RZ, however N2O fluxes across the soil-atmosphere interface did not display strong or consistent spatial trends. There was a disconnect between the subsurface variables and the fluxes at the surface, in that N2O emissions did not reflect the N2O concentrations produced in the shallow soil profile (150 cm deep), nor were they significantly related to the geochemical environment at each position. The lack of visible spatial trends in N2O fluxes may have been due to an “oxic blanket” effect which may divide the surface from the subsurface soil profile. As N2O fluxes in this study (-0.28 to 1.3 nmol m-2 s-1) were within the range observed at other, similar study sites, the oxic blanket doesn’t appear to impede concentrations of N2O reaching the soil-atmosphere interface. This may suggest that the N2O released as a flux was being produced in the very shallow soil profile (0 – 5 cm), above the soil gas profile arrays installed at this site. Subsurface concentrations of N2O were fairly high at certain depths and times, which was not reflected in the fluxes. This may have resulted from nitrifier denitrification reducing N2O to N2 before it reached the surface, in aerobic zones above the water table. Another potential reason for the lack of connection between subsurface processes and surface emissions was the high heterogeneity observed across the RZ, which may have overshadowed potential differences between positions. Physical soil properties like porosity and bulk density across the RZ also potentially impacted the N2O movement through the soil profile, resulting in similar fluxes among positions, and over time. The missing connection between subsurface N2O concentrations, ground water nutrients, and the surface fluxes was not a hypothesized result, and requires further research and analysis for a better understanding of the production and consequent movement of N2O.