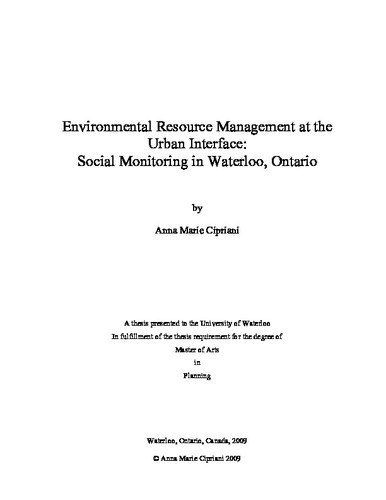 The purpose of this research is to measure impacts on environmental constraint areas due to the presence of new suburban populations, to assess attitudes and behaviours of residents toward greenspaces incorporated into the design of the community and to attempt to project if the City of Waterloo’s vision for suburban development in the proximity of environmentally sensitive lands is being realized. Analysis includes the results of a mail survey for a sample of 600 households from three subdivision developments on the West Side of Waterloo, stratified according to the proximity to an environmentally significant forest in the study area. Similar questions posed to the sampled West Side residents were also included in the biennial K-W Area Study 2005 which included 2000 households in order to acquire a level of comparison between residents living on the West Side of Waterloo and the rest of the twin cities. Unstructured, open-ended interviews were conducted to gain insight into the normative practices, beliefs, and value structures of residents. Observational fieldwork data of the study area highlights encroachment and environmental stewardship in the environmentally sensitive area. Findings and conclusions suggest a very positive citizen response to the inclusion of an environmental amenity in the subdivision design but at the same time a continuation of adverse environmental impacts resulting from population growth, and minimal suburban lifestyle change in this community which aspired to incorporate the principles of new urbanism.