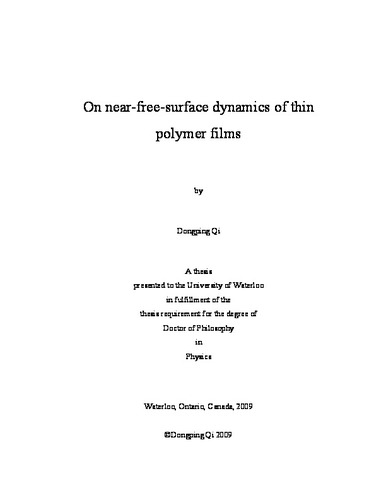 Studies show that dynamical properties of ultra-thin polymer films deviate from those of bulk materials. Despite some controversial issues, there is growing evidence indicating that the interfacial properties play a key role for observed dynamical anomalies. However, how and how much the interfacial properties affect the average dynamics of the nanometer scale systems are still elusive. In this work, we developed several novel techniques to investigate near-free-surface dynamics of thin polymer films. We studied surface dynamics of glassy i-PMMA films using a nano surface hole relaxation technique: a strong substrate property dependence and an unexpected molecular weight dependence were observed; we found that a local Tg of ~40K below bulk Tg could be assigned to the surface region. We used nano gold particle embedding to study PS surface dynamics: enhanced surface dynamics and weak temperature dependence were observed for the surface region; a depth profile with the nm resolution was observed; viscous liquid-like and soft solid-like properties were observed in the first 5.5nm and next 3.3 nm regions in PS films; no molecualr weight dependence was found in glassy PS films. We built a low level noise measurement system to study the thermal polarization noise in PVAc films: cooperative rearranging dynamics were evidenced; the noise power spectral density (PSD) is found to fluctuate around a certain average level without discernable peak shift; we observed some relatively big jumps or fluctuations in successive integrated PSD’s, which indicate some energy exchange between different microscopic domains in glassy polymer systems. We developed a novel nano rheology AFM technique to study the near-free-surface dynamics of thin polymer films: enhanced near-free-surface dynamics with weak temperature dependence are observed for PVAc films, which is similar with the PS case.