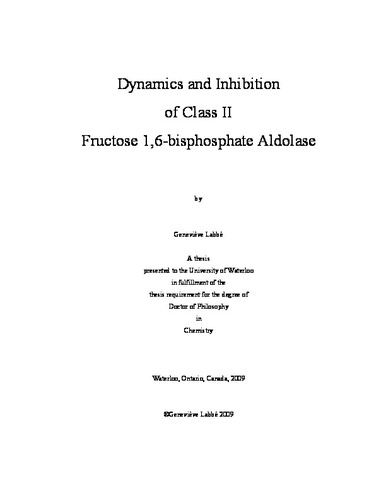 It has been suggested for many decades that the essential and ubiquitous enzyme fructose 1,6-bisphosphate aldolase (FBA) could be a good drug target against bacteria and fungi, since lower organisms possess a metal-dependent (Class II) FBA, as opposed to higher organisms which possess a Schiff-base forming, metal-independent (Class I) FBA. The purpose of this doctoral project was to purify and study the inhibition of Class II FBA from pathogenic organisms. The capacity of various thiol compounds, as well as various derivatives of the metal-chelating compound dipicolinic acid, to inhibit the purified Class II FBAs from Mycobacterium tuberculosis, Pseudomonas aeruginosa, Bacillus cereus, and Magnaporthe grisea, was compared. The genes were subcloned in the Escherichia coli vector pT7-7 and the enzymes purified to near homogeneity, and characterized using a coupled assay. A small fed-batch fermentor was used to express the enzymes in E. coli, and yields of up to 2 grams of purified protein per liter of bacterial culture were obtained. The commercially available compound 2,3-dimercaptopropane sulfonate was found to be the most effective inhibitor against the aldolase from M. tuberculosis, with a second order binding rate constant of 500 +/- 4 M-1 s-1, which is three times and twenty times higher than the constants obtained with dipicolinic acid and EDTA, respectively. In an attempt to detect the enzyme dynamics during catalysis or inhibition, tryptophan residues were used as reporter groups and introduced by site-directed mutagenesis into the catalytic mobile loops and near the active site of the aldolases from M. tuberculosis, P. aeruginosa and B. cereus. The kinetic characterization of the mutants is described; as well as the effect of substrate binding on the steady-state and time-resolved fluorescence signals. Finally, the possibility of using the recombinant Class II FBP aldolases for industrial chemical synthesis was explored by measuring the enzymatic stability in organic solvents, at high temperatures and at different pH conditions. Surprisingly, the commercial Class I enzyme from rabbit muscle was more stable than the metalloenzymes in most conditions tested. The results presented in this thesis will be useful for the future design of Class II FBP aldolase inhibitors.