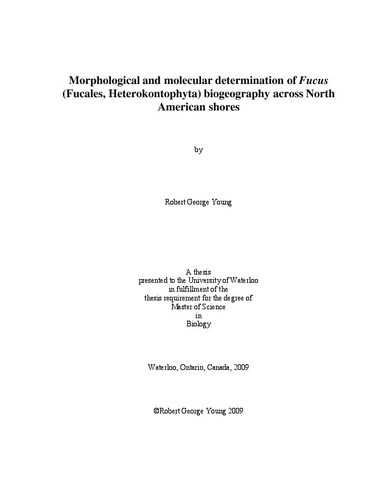 The genus Fucus (Phaeophyceae) has nine commonly accepted species, six of which inhabit North American shores: F. gardneri, F. serratus, F. distichus, F. evanescens, F. vesiculosus, and F. spiralis. Fucus inhabit the intertidal zones of the Atlantic, Pacific and Arctic Oceans and due to their highly plastic and morphologically simple phenotypes, are valuable candidates for molecular phylogenetic research. Furthermore, Fucus species are valuable for biogeographic investigations due to their relatively slow migration, limited dispersal range, and easily collected distribution. The closest ancestral species to the genus is a Pacific endemic Hesperophycus californicus supporting a North Pacific origin of the species (Serrão et al. 1999). However, a closer relationship between Atlantic and Arctic Fucus has been described casting doubt on the Pacific origins of the genus (Lindstrom 2001, Dunton 1992). The investigation of Fucus across this area is necessary to elucidate the apparent contradiction in the origin of the genus. Samples were collected from 79 locations across North American waters. The amplification of the divergent mtDNA spacer region was performed to assess taxonomic placement of 55 collected species and reconstruct the biogeography of North American Fucus species. Morphological analysis was also completed based on 21 measured characteristics in an attempt to support molecular analysis. Results of the study indicate two distinct lineages among collected samples. One lineage (F. spiralis and F. vesiculosus) with a distinct Atlantic origin and the second lineage (F. distichus and F. serratus) with a widely distributed F. distichus, and the Atlantic F. serratus. Morphological analysis and statistical support for these lineages was determined through discriminant analysis of the collected samples. Overall results determined biogeographic influences in the F. distichus species complex across Arctic, Pacific, and Atlantic regions with little apparent biogeographical influence within F. vesiculosus, F. serratus and F. spiralis. Closer phylogenetic relationships between Arctic and Atlantic samples were apparent as suggested by Lindstrom (2001) and Dunton (1992).