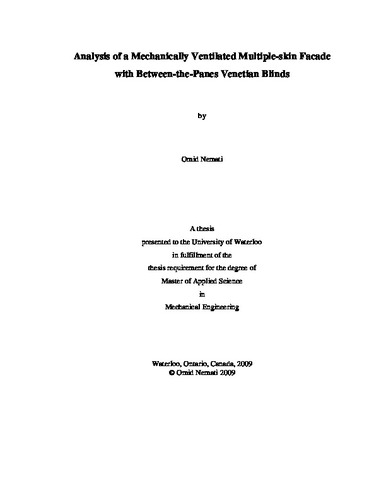 A Building Integrated Photovoltaic/Thermal (BIPV/T) system that consists of a mechanically ventilated, multi-skin facade, a between-the-panes venetian blind layer, and a between-the-panes Photovoltaic (PV) panel is considered. Ambient air is drawn in and forced to flow upward through the system. As air moves through the system, it is heated by the blind layer, the glazing layers, and the PV panel. This BIPV/T system is especially attractive because it can produce electricity and thermal energy in the form of preheated fresh air and allow for adjustable daylighting. There is a need to understand, design, and optimize BIPV/T systems. The velocity and temperature fields around the blind slats were experimentally and numerically studied. Experimental observations and numerical models are essential in understanding the complex fluid dynamical and thermal system and providing design and optimization guidelines. Solar-optical and Computational Fluid Dynamics (CFD) models were developed and validated at various blind slat angles and flow mean speeds. Particle Image Velocimetry (PIV) and temperature measurements were taken inside the ventilated facade. A simple empirical one-dimensional (1–D) model was developed, based on average surface temperatures and heat transfer coefficients, to quickly calculate average surface temperatures and heat flux rates. Between-the-panes convective heat transfer coefficients were obtained from CFD and used in the 1–D model. Despite high vertical temperature stratifications along the glazing, shading, and air layers, the 1–D model can predict the surface temperatures accurately and allow for future optimization and inclusion in building energy simulation software.