Time- and Space- Resolved Solid-phase Microextraction for In Vivo Study 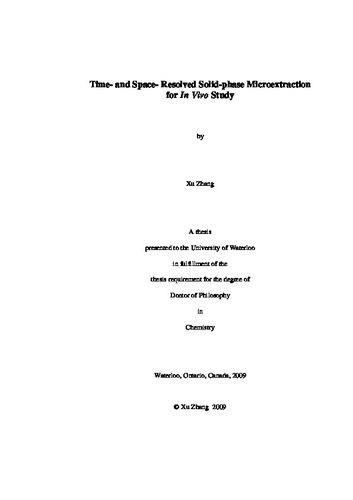 Although solid-phase microextraction (SPME) technique has gained wide applications from in vitro environmental investigations to in vivo pharmacokinetic studies, there are still challenges for utilizing SPME to track fast concentration change over time at a specific location in a heterogeneous system, such as studying the tissue- specific metabolism or bioaccumulation of pharmaceuticals in a living animal. In this case, the technique must be adaptable for in situ analysis with highly temporal and spatial resolutions. The goal of the research presented was not only to address this issue but also to develop new analytical methods that were more effective for in vivo study using SPME. In order to improve the temporal resolution, fast SPME sampling technique based on pre-equilibrium extraction must be adopted. However, more efforts need to be placed into calibration so as to guarantee the accuracy of the analysis. In this thesis, firstly, the kinetic calibration was proposed for adsorptive SPME fibres that were widely used for biological samples, which paved the way for performing fast sampling for in vivo dynamic monitoring. Secondly, the kinetic calibration was applied for in vivo pharmacokinetic study with beagles, with which not only solid experimental evidence was obtained for the calibration theory, but also an example was shown to address the quantitative capability of in vivo SPME. The developed method showed comparable sensitivity to traditional blood analysis (linear range 5 – 2000 µg/L and limit of detection: 5µg/L). Furthermore, the traditional kinetic calibration based on isotopically labelled standards was simplified to a single time-point calibration, and a single standard calibration was developed for multiple analytes. Therefore, the fast in vivo sampling could be accomplished in a simple but accurate measure; compared to the established equilibrium SPME technique, statistically no significant difference (P<0.05) was observed by using one-way ANOVA and the post-hoc Turkey’s test for multiple comparisons. The second aspect of the thesis addressed the spatial resolution of SPME for in situ analysis. Firstly, the sampling of the SPME with high spatial resolution was modeled with multilayered gel system with the mini-sized SPME fibres. The feasibility of the SPME for in vitro application was demonstrated by sampling in an onion bulb with heterogeneous structure. Afterwards, the miniaturized fibre was successfully applied to the in situ analysis of the concentration distribution of Ochratoxin A in semisolid cheese samples with acceptable sensitivity (Detection limit was 1.5 ng/mL and the linear range was 1.5-500 ng/mL) and comparable accuracy to the standard methods such as liquid extraction and microdialysis. Finally, the in vivo application of the space- and time- resolved SPME was implemented to study the tissue-specific bioaccumulations of pharmaceuticals in fish adipose fins and muscle tissues. The results were validated by the standard method liquid extraction, and they were also comparable to the literature results. The research presented here demonstrated the application potential of the time-and space- resolved SPME for in situ dynamic and static analysis in a living system such as a beagle or fish, and in a non-living system such as a cheese piece or an onion bulb.