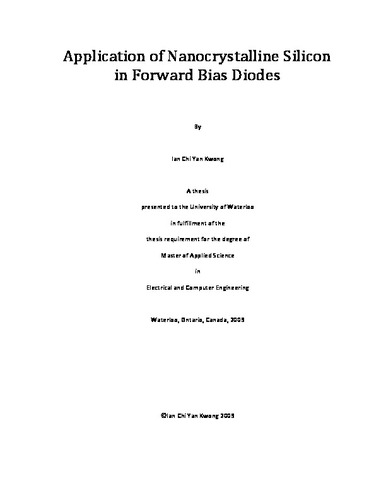 Nanocrystalline silicon (nc-Si:H) is an attractive material for fabrication of low temperature, large area electronic devices due to superior properties versus the traditional amorphous silicon (a-Si:H) and polycrystalline silicon (polySi). Nanocrystalline silicon possess higher carrier mobility and better stability than a-Si:H and better device uniformity and lower fabrication cost than polySi. This thesis looks at the application of nc-Si:H material in fabricating two different diodes used for rectification and light generation. Optimization of n-type nc-Si:H deposited via plasma enhanced vapor chemical deposition (PECVD) was achieved through adjusting the concentration ratio of phosphine (PH3) dopant source gas versus silane (SiH4). Optimizing for dark conductivity, n+ nc-Si:H material with dark conductivity of 25.3 S/cm was deposited using a [PH3]/[SiH4] ratio of 2%. Using the optimized n+ nc-Si:H film, a p-n junction diode utilizing an undoped and an n+ nc-Si:H layers was fabricated designed for rectification use. The diode achieved a current density of 1 A/cm2, an ON/OFF current ratio of 106 and a non-ideality factor of 1.9. When the 200*200µm2 nc-Si:H diodes were employed in a full-wave bridge rectifier, a 2.6 V direct current voltage could be generated from an input sine wave signal with amplitude 2 VRMS and frequency of 13.56 MHz, thus demonstrating the feasibility of using nc-Si:H to fabricate diodes for using on radio frequency identification (RFID) tags. Nanocrystalline silicon was also applied in fabrication of a light emitting diode (LED), by utilizing the nanocrystals embedded inside nc-Si:H, inside which recombination of carriers could result in radiative recombination. By limiting the deposition time of the nc-Si:H, 10 – 20 nm thick films of nc-Si:H were used to fabrication a p-i-n structure LED with average crystallite size between 7.5 nm to 13.7 nm corresponding to an theoretical emission wavelengths in the near infrared region of 875 nm to 963 nm. Unfortunately, light emission from the nc-Si:H LED were not detected using two different methods. Undetectable emission could have been due to a combination of low recombination efficiency due to carriers recombining in defects in the a-Si:H matrix and majority of current travelling completely through the nc-Si:H films without recombining. A study of the thin intrinsic nc-Si:H films used in the LED was carried out. The thin films were found to be highly defected, with large variation in current-voltage relationship measured and hysteresis observed in the IV characteristic. Annealing the nc-Si:H films were found to cause a drop in conductivity explained through hydrogen effusion from the nc-Si:H film during annealing. Passivation of defects was achieved through the use of hydrogen plasma which resulted in a lowering of activation energy measured in the film. Oxygen plasma was also trialed for passivating the nc-Si:H film but the effect was only a temporary increase in current conduction attributed to oxygen ions chemisorbing temporarily at the film surface.